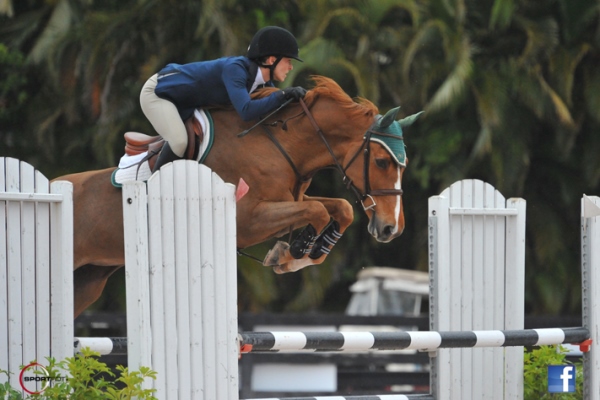 When one thinks of a broodmare they may think she is retired from the show ring and living out her days, pregnant in a pasture. However, with the implementation of embryo transfer (ET) in the horse breeding industry it is possible for a mare to produce several offspring in a given breeding season while continuing in competition. We recently published an article about Balancing a Stallion’s Life in the Breeding Shed with Competing in the Show Ring. Now it’s time to consider what goes into balancing the show and breeding career of an ET donor mare. In this article we will discuss reasons an owner may choose to breed their show mare and what to consider when determining if this is a path you wish to travel.

For the purposes of this article we spoke with Matty O’Rourke (photo above left and below left, aboard Palotti VDL), a client of Peterson and Smith Equine Reproduction Center (PSERC) in Ocala, Florida. Matty utilizes the services of this SBS Affiliate Laboratory to breed and flush embryos from her 18 year old Dutch Warmblood Elite Sport mare, Palotti VDL (Indoctro x Nimmerdor x Purioso), while continuing to compete with her in the show ring.

What is Embryo Transfer?

Embryo Transfer has been used in the horse breeding industry for many years either for competing show mares, older mares which may be physically unable to carry a foal and/or a variety of other reasons the mare herself is unlikely to carry a foal to term. The embryo transfer process requires that the ovulation of a donor mare and a recipient mare be synchronized. The accumulation of large herds of embryo recipient mares throughout the country have made this part of the process much easier.

It is extremely important to know what day the donor mare ovulates so the day of the embryo flush can be scheduled with the embryo flushing facility and the embryo recipient facility. A mare bred with cooled semen is typically flushed on day 7-7.5 after ovulation. Whereas, a mare bred with frozen semen is flushed on day 8 after ovulation. Depending on the ambulatory services provided by your veterinarian and the facilities at your farm, it is possible the mare could be bred at home and even flushed at your farm. If such services aren’t available the mare may be bred at home and then trailered to the vet clinic for the embryo flush and then return home immediately afterward. Both of these scenarios offer the benefit of the mare remaining in training or traveling to shows between breeding and flushing of her uterus for embryos. Other mare owners may opt to treat this time as a “break” from training/showing and send their mare to the embryo flushing facility for breeding and embryo flushing. Each scenario offers its own benefits and can be tailored to the schedules of you, your mare and your vet.

The number cycles you choose to breed and flush embryos from your mare can also be customized to your particular situation. You should check with your breed registry to verify the number of foals which can be registered in a given year. It may be possible to flush several embryos from a mare in a given year but freeze the additional embryos for future use.  You can find more about freezing equine embryos in our blog article, Cryopreservation of Equine Embryos. When asked if he thinks multiple flushes and short cycling can impact a competition mare Dr. Matthews of PSERC said, "In general, no I don't.  There are exceptions to everything but frankly it has never been a complaint I've heard from an owner or trainer."

Why Perform ET on a Show Mare?

The genetics of a mare play a key role in deciding whether or not to breed her regardless of whether it be for embryo transfer or after retirement from competition. She may have desirable genetic traits (temperament, confirmation, trainability, etc.) which she could potentially pass on to her offspring. The marketability of her foals may be decent based on her bloodline alone. However, if she continues in competition she can earn points, prize money, etc. making her offspring even more appealing to potential buyers.  Dr. Phil Matthews said,

"Obviously there are many reasons to enlist a mare in an ET program.  One such reason is to take advantage of a mare's genetics while she is still competing.  Over the years this has been a large percentage of our donor mare population and I think has had very satisfying results for our clients.  Many excellent mares compete well into their teens and without ET their genetics would be lost during these years of high fertility."

As the current owner you may already have knowledge of offspring she has foaled in the past. Prior to the use of ET it was common for sport horse mare owners to give their mares a year or two off from competition so they could produce a foal. Once the foal was weaned she would return to training and competition. 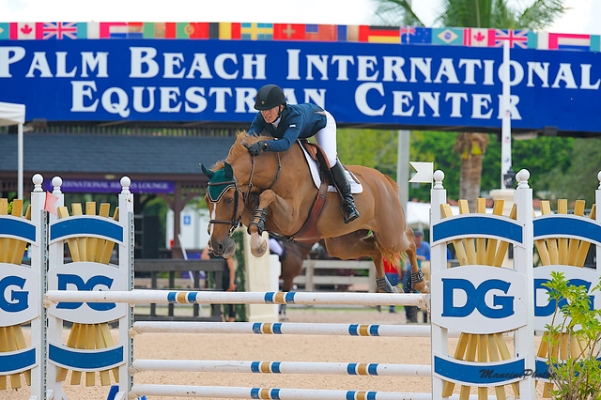 Even with the possibility of ET some owners still manage their mares in this manner. This allows the mare owners the ability to know what kind of foals their mare produces. This was the situation with Matty and Palotti VDL. Matty purchased the mare when Palotti VDL was 16 years old.  Prior to Matty’s acquisition of her the mare had foaled two offspring, one at the age of five while in Europe and the other when she was 10 years old, after her arrival in the United States. These two foals were not the result of ET but Palotti VDL actually carried both of these foals herself. Due to the mare’s age, Matty has opted to perform ET on Palotti VDL so she can continue to compete while the mare is still able.  Dr. Matthews said this about flushing embryos from younger competition mares versus older barren mares, "In general, the success rate of flushing embryos from younger, competition mares is higher than that of older, barren mares and is another reason to do it."

Like any horse owner, a mare owner knows their mare well. Knowing a mare loves her “job” (cutting, reining, jumping, cross country, etc.) it would almost seem cruel to take her out of competition and retire her to the pasture as a broodmare. Matty said of Palotti VDL, “You cannot take her to a show and not compete. She won’t get back on the trailer. At home, she will walk up to the trailer ramp and wait to get on if she hasn’t been to a show in a while.”

What to Consider When Competing on an ET Donor Mare

Nutrition plays a key role in competition as well as breeding. If a mare is traveling extensively for competitions she may lose weight or condition due to the added stress. Dr. Clair Thunes discusses the importance of knowing your mares body score and what the optimal body condition score for conception is in her article, Feeding For Conception.

Breeding and showing a mare can also be a challenge as a majority of the show season corresponds with breeding season. It may be necessary to experiment with different scenarios of training and showing in order to optimize her reproductive potential. If your mare becomes stressed during an extensive training and show schedule you could cut back on them during the periods which she is being bred and embryos are due to be flushed.

Will you have to modify her show schedule while she is in estrus? Maybe her concentration is not affected during estrus but it could also be that she becomes distracted and does not perform as well. Some owners and trainers put their mares on estrus suppressing supplements so they will not be in heat during shows. Others may choose to manipulate the estrus cycles of their mares using Short Cycling or a Progesterone and Estrogen Therapy (P&E) protocol.

Another option is to postpone her show schedule until you are able to breed her and flush embryos as early in the breeding season as possible. This can be done by putting a mare under lights. You can find more on this topic in our articles Hastening the Onset of Breeding Season and New Alternative to Putting Mares Under Lights.

Other articles with a wealth of information about what to consider before breeding your mare are Minimize Stress and Promote Success by Being Prepared for Breeding Season, Breeding Mares on Foal Heat and Preparing Your Mare for Breeding. 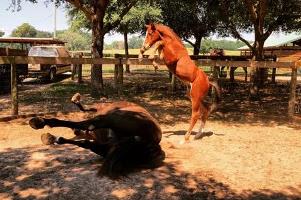 When choosing to breed and flush embryos from your show mare the best idea is to have a plan but go into it knowing it must be a flexible one. Matty said, “I can have a big plan sketched out but in reality Palotti VDL dictated the timing this year. She needed some time off from showing so I sent her to PSERC during week 7 of the Wellington Equestrian Festival rather than waiting until it and the Spring Circuit ended. The desire to keep going when showing well is quite an exercise in discipline. I have to remind myself to stick to the plan even when I just want to show. The potential payoff in a few years trumps a few blue ribbons now.”  Payoffs like her colt Kasteel (photo left) by the official Dutch stallion, Carambole N.O.P.

In closing, Matty mentioned it is important to find an embryo transfer facility you feel comfortable working with. She said,

“My experience at PSERC in particular cemented my decision to breed again this year. The staff is amazing, friendly, helpful and have made the process effortless. I am extremely happy and recommend PSERC to friends.”