Caitlyn (Caity) Hood serves as a technician for the SBS Affiliate Laboratory, Oklahoma City Equine Center (OCEC). She grew up in Southwestern Oklahoma in the town of Mountain Park. Her family owns a cattle ranch/wheat farm which is mostly a cow-calf operation. Growing up there were always several horses used for ranch work and she would watch her father team rope. However, at the age of thirteen, Caity’s mom gave her English riding lessons as a Christmas present. It took only one lesson and she was hooked!

For the first few months she continued to ride the school horses at the stable where she took lessons. That is until she decided she could make a hunter out of one of her dad’s heading horses. It was lucky for her that the gelding was a wonderful horse and easy to train. His name was Shady but she showed him under the fitting name of Roly Poly Cow Pony. He turned out to be a pretty nice hunter and the pair went on to win several division championships. Even though she had several other horses throughout her high school years she mostly made the ranch horses pull double duty…cow ponies by day, show hunters by night. She also had the privilege of riding a few off track Thoroughbreds for her trainer. 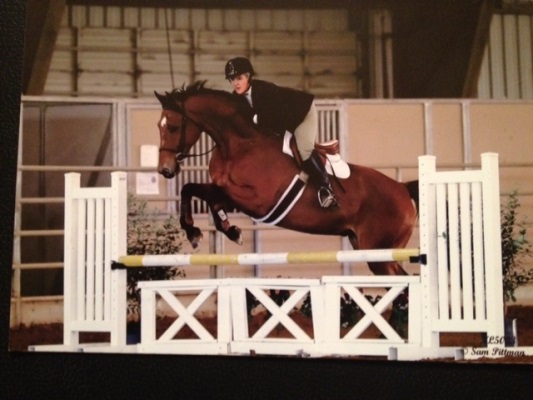 Caity attended Oklahoma State University (OSU) after graduating from high school. Upon her arrival at college she tried out for their equestrian team. She was chosen for the team and rode hunter over fences as well as on the flat for her four years of college. During that time she qualified for nationals three of her four years in college competition. Caity still competes in hunter/jumper shows aboard her horse, Merlin. However, she is only able to show once or twice a year as the time allows.

Caity became acquainted with Dr. Carroll of OCEC while she was still in college. He encouraged her to apply for a technician position at OCEC once she graduated. After graduating with her Bachelor’s degree in Animal Science she did as he recommended and became his personal technician in October 2007. As his technician she has many responsibilities which include anything from scheduling, record keeping, and billing for Dr. Carroll’s services to processing frozen semen and managing its inventory and distribution. She also goes on farm calls with Dr. Carroll to several breeding farms for mare management services and assists with fertility challenged stallions.

She was asked what she enjoys most about working with horses. Caity said,

“I find it really fascinating to see horses that I got to see when they were embryos go on to be successful individuals. I also enjoy working with a problem stallion and figuring out what works for him and what we can do in the lab to improve his fertility.”

When Caity has free time she enjoys reading, riding Merlin, spending time with her husband and playing with their two dogs (Polly and Bandit).