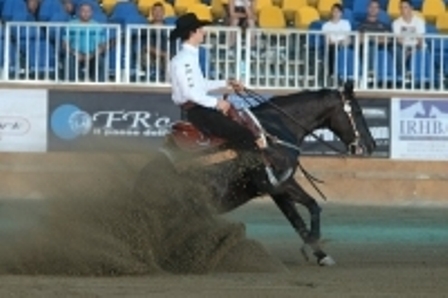 Quote from Manuel Cortesi, “PC Customblack Widow was bought as a yearling and was started by my father before I took over the ride. The mare has a lot of character and from our win at the German Futurity last year she has matured quite a bit. I am thrilled about winning the Italian Derby this year. I certainly did not expect such a result! PC Customblack Widow and I grew together and I'm sure when the time comes, she will make a great mom!”

It was a successful competition for Manuel, he also took reserve honors in both divisions aboard his 2011 NRHA European Futurity Level 4 Non Pro Champion, PC Sliderina For Me (Dualin For Me x The Slide Surprise).