You have finally made your decision and the booking with Mr Right is made. In a few short months your mare will be bred to the stud of your dreams and all that is left now is to wait out the cold winter months and for spring to roll around. There is always that niggly question though, will she cycle and will she take? If there was just some way you could help the odds. Well you are in luck because there is. You can make sure that she is carrying an ideal amount of condition.

Since the mid 1980’s equine managers, veterinarians, and nutritionists have used a system of body condition scoring (BCS) to assess the caloric needs of horses of all breeds and disciplines. This system developed by Hennecke at Texas A&M assesses the body fat cover over six areas of the horses body which are then awarded a score on a scale of 1-9 (1=emaciated, 9=obese). Typically horses should score between 4 and 6. It has been generally accepted for a number of years that broodmares should score a little higher on the body condition scoring scale than other horses. This not only allows for ample body energy stores for utilization during the demands of lactation but it also helps with reproductive viability.

In a study of 927 mares those with a score of <5 had a conception rate of only 71% compared to 92% for those with a score of 5-7 and 96% when body condition was greater than 7. However as little reproductive benefit has been noted when mares have a BCS over 7.5, maintaining a mare above this level of condition is not financially sensible and may carry other negative consequences.

Work by Vick et al., has shown that overly fat mares may have decreased reproductive function with increased length of time between ovulations due to a persistent corpus luteum making it hard to rebreed if not successful at the first attempt. Additionally there is a growing body of research that obesity can result in decreased insulin sensitivity which can lead to aberrant reproductive cycles. Further, research by Adaniak et al., where overweight animals were maintained on high plains of nutrition has shown increased likelihood of hyper insulinemia and in turn impaired oocyte quality. 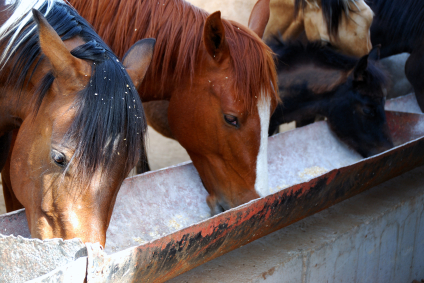 A publication this year by Salaza-Ortiz in Reproductive Biology and Endocrinology describes a 3 year study of 30 Welsh pony mares and demonstrated a clear association between body condition and the duration of winter ovulatory inactivity.

The mares (which had not nursed a foal the year prior to the experiment) starting out with comparable body condition (3.5 on a 5 point scale equivalent to about a 7 on the 9 point scale) and weight (average 300kg) were broken into three groups; well fed, restricted or variable feed intake. The well fed group gained about 22.5kg in the first year which was then maintained, and the restricted group lost 66kg which was also then maintained for the rest of the experimental period. The body weights of the variable group fluctuated between those of the well fed and restricted. The feed intake of the variable group matched that of the well fed group for the first 6 calendar months of each year and the restricted group the remainder of each year. All mares were kept in a natural photoperiod for the location’s latitude which averaged 8 hours of daylight at the winter solstice and 16 hours at the summer solstice.

Results showed that 44% of the well fed mares showed a period of seasonal anovulation the first winter compared to 80% of the restricted group the first winter and 10% in the 2nd and 3rd winters. By comparison 20% of the variable group never showed a period of winter ovulatory inactivity. The number of luteal phases each year was significantly different between groups each year with the well fed mares having 14.2 luteal phases each year, and the restricted and variable groups having 7.6 and 9.5 respectively. The number of cycles per year was significantly higher for the well fed group compared to the other two groups which only differed from each other in the 2nd year.

Perhaps one of the most pertinent points from this research for the average mare owner is that in the first year of the experiment, of the mares who entered a period of anovulation, ovulatory activity resumed in March for the well fed group and not until May for the restricted and variable groups. So while mares should not be maintained in an obese condition there are clear benefits to maintaining a BCS of 6-7. If your mare is on a declining plane of nutrition through the winter (losing condition) you can expect her to start cycling later next spring as compared to if she were on an already good or rising plane of nutrition (maintaining or gaining weight). Starting to cycle later gives you fewer opportunities to get her bred during the breeding season. 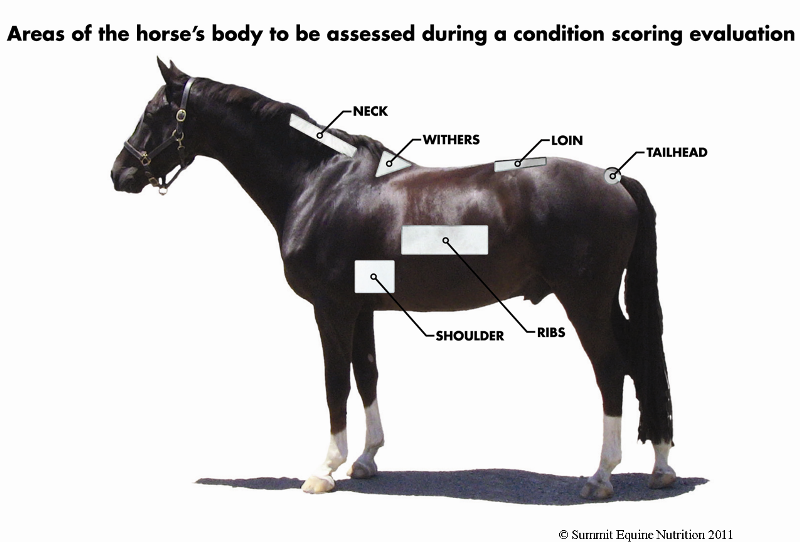 Assessing condition needs to be done not just visually, but also manually, especially when true condition may be hidden under a heavy winter coat. The six areas to be palpated are; the neck, withers, shoulder, ribs, loin and tail head. A score of 5, 6 and 7 are described as follows:

Note that mares heavy in foal may score poorly across the ribs due to the weight of the foal pulling their skin taught across the barrel. For these mares greater emphasis should be placed on the neck shoulder and withers.

Many open and maiden mares and those in early gestation can maintain such body scores on a diet of good quality forage or pasture alone as these will provide ample calories and protein. Other mares may require additional calories from supplemental feed to maintain ideal condition. A feed should be selected that is fed at the recommended serving rate to insure the correct intake of vitamins and minerals and a balanced diet. Those mares able to maintain themselves on forage alone will also need a source of the vitamins and minerals often lacking in forages.

Deficiencies of vitamins and minerals can have negative effects both pre- and post- implantation. Research across species has shown that iron, zinc, copper as well as vitamins A and E are particularly important during pregnancy. Iron and vitamin A in the form of beta carotene are typically abundant in the equine diet. However vitamin E is generally only adequate in good quality pastures and zinc and copper are typically deficient in most forage sources. For this reason mares maintained on forage only diets should be fed a good quality ration balancer formulated to work with the type of forage being fed.

Condition scoring your mares now and assessing whether they need to gain or lose weight to be in the ideal BCS range come breeding season is one important way that you can help insure that your dream of a successful breeding to Mr Right becomes reality.