How Long Does Frozen Semen Last? 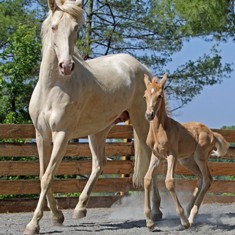 There is no expiration date on frozen semen. As long as the semen is properly maintained at the correct temperature in a liquid nitrogen storage tank, the working life of frozen semen is believed to be nearly unlimited. At SBS we have produced pregnancies with semen stored for more than 20 years. By utilizing the highest quality freezing extenders available, computer controlled rate cell freezers and maintaining rigidly controlled storage conditions, SBS maximizes the duration of sperm survival.

Equine frozen semen is still a relatively new industry, the oldest frozen semen from stallions dates back to the early 1980s. The oldest frozen semen within our SBS affiliate network is from the show jumper Abdullah, winner at the 1984 Olympic Games, 1985 World Cup and 1986 World Equestrian Games. Abdullah was also the first stallion in the US to have frozen semen exported to Europe. We still ship his semen today and he continues to sire foals many years after his death. The photo shows Cassidy, a Morgan foal born as a result of frozen semen that was 18yrs old at the time the mare was bred.

In the bovine industry, frozen semen has been used in the breeding of dairy cattle since the 1950s. The oldest bovine semen believed to be in existence was from a sire named Cottonade Emmet, frozen in 1952. In human medicine, the first successful pregnancy with frozen semen was reported in 1953. In 2004 a baby was born using sperm that had been frozen for 28 years; this is believed to be the oldest frozen sperm used to create a baby.