Managing and Feeding the Orphaned or Rejected Foal

Posted by Don Kapper in Nutrition 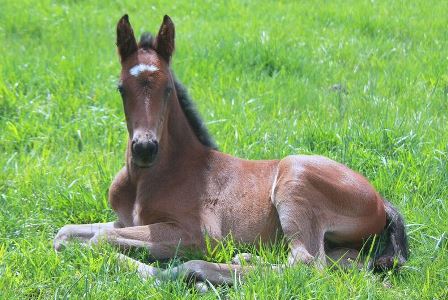 Each foaling season, a number of foals are orphaned, rejected, or the mares have no milk (agilactic). Don Kapper, formerly of Progressive Nutrition, has provided the following article with suggestions on how they recommend dealing with such situations. According to Mr. Kapper and Progressive Nutrition, the following is a highly successful program for raising these foals that has been implemented at several universities, veterinary neonatal hospitals and on many horse farms. Their research has shown that foals raised on this program will grow and mature the same as non-orphans and will attain their normal size.

Research was completed at The Ohio State University1, comparing the different growth rates of foals raised according to two differing protocols. In the first group foals remained on the mare and were provided a milk-based pellet as a creep feed. In the second group, foals were weaned at three days and fed a mare’s ‘all-milk’ milk replacer and provided a milk-based pellet in a creep feeder. Researchers recorded weekly measurements of their body weight, heart girth, body length, wither height, hip height, and cannon bone circumference. Results showed that foals developed similarly in skeletal size and all foals received similar body condition scores (BCS) and were healthy. These foals were not negatively affected by early weaning and did not develop bad habits. This ‘Feeding Program’ will be helpful to those who are managing foals who are: orphaned, rejected, out of mares with no milk or weaned early.

Colostrum, or the mare’s first milk, contains high levels of ‘whole protein antibodies’ to protect the foal from disease. Mares secrete colostrum up to 24 hours after foaling. Foals will absorb colostrum for 12 to 24 hours after birth, or until an adequate amount of the whole protein antibodies are absorbed through the small intestine. The quicker we can get the colostrum into the foal, the faster the foal has both systemic and local immunity against disease pathogens. When possible, Progressive Nutrition recommends that when the foal is sternal and has developed a suckle reflex (you can see and hear them suck on their tongue), you milk 3 to 4 ounces of ‘colostrum’ from the mare, put it into a bottle and give to the foal before it stands. All new born foals need colostrum, beginning within the first hour after birth. All 'orphaned or rejected foals', weighing 100 lb. at birth, should receive 250 ml. (approx. 1 cup) of colostrum each hour for the first six hours after they are born. This is a total of 1500 ml, or about 3 pints of colostrum per 100 lbs. of body weight. Therefore, Progressive Nutrition recommends that all breeding farms should have a minimum of 3 pints of frozen colostrum in storage. When needed, it should be removed from the freezer and thawed at room temperature or in a warm water bath. Pour the colostrum into a bottle, which has a ‘lamb’ nipple with the ‘X’ opening at least ½ inch wide, and let the foal suckle. NEVER microwave the colostrum because that will ‘destroy’ the whole protein antibodies and render them useless.

Provide an ‘All-Milk’ Equine Milk Replacer ‘Powder in Solution’ Next 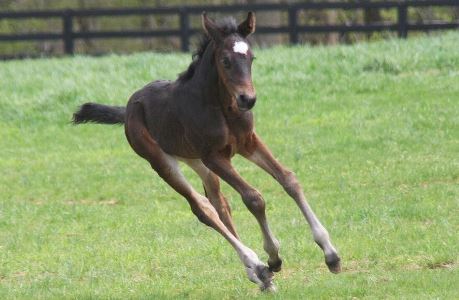 After the colostrum has been consumed, introduce the foal to the ‘All-Milk’ Milk Replacer powder mixed into a liquid solution. You may start them drinking from a shallow plastic bowl or from a bottle with a lamb nipple attached, depending on how aggressive the foal is. Most of the time a bottle with a nipple is not necessary because the foal will learn to drink from a shallow bowl or bucket very quickly after birth. Teach your foal to drink by placing your finger in their mouths to stimulate the suckle reflex. While they are sucking, raise the small bowl containing the ‘warmed’ liquid milk replacer solution up to their muzzle. After they begin to suck and drink, slowly remove your finger from the foal’s mouth. If he stops drinking, repeat the above steps until he is drinking by himself. Always bring the milk up to the foal; do not force the foal’s head down into the container. The first day, warm the liquid milk replacer to encourage consumption. When the foal drinks without assistance, hang a bucket with the milk replacer solution in it from the stable wall at the foals shoulder height. This will allow the foal to drink whenever it wants, just like the mare was there. The bucket should be a contrasting color to the wall to make it easy for the foal to find.

The selected ingredients in both products are very easy to digest and will help maintain the natural pH level in the foal’s digestive system. Make sure to follow the mixing directions as described on the packaging. To assure the equine milk replacer powder is ‘all-milk’, look at the percentage of fiber listed on the feed tag. It must be less than 0.4% Crude Fiber. A milk replacer containing 1.0% Crude Fiber or higher will contain a different protein source that is less expensive, but not as digestible to the newborn foal. A non-digestible protein source can cause loose stools to diarrhea in the young foal during the first four to six weeks of age.

For additional information on the feeding program described above please see Progressive Nutrition’s entire article, Feeding the Orphaned or Rejected Foal. The article will further explore the topics of mixing amounts, how much to feed/day, when to begin feeding separate water and the ‘milk-base’ pellets, what to do at weaning time, how many 22 lb. buckets are needed from birth to weaning, what to do if a foal is orphaned after 3 weeks of age and at what age to remove all milk.

This article was provided by Donald R Kapper, PAS, a retired Nutrition Consultant to and Member of the Cargill Equine Enterprise Team.  Progressive Nutrition, is a Cargill Company.