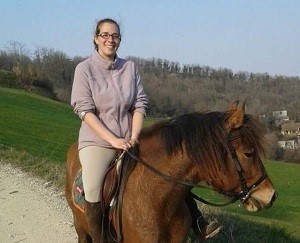 Marta Agrò (photo left) works alongside Dr. Sandro Barbacini at Studio Veterinario Associato Luretta, an SBS Affiliate Laboratory located in Piacenza, Italy. She has always had a passion for horses and was thrilled when one of the founders of the Luretta veterinary clinic asked her to join his team which she has now been a part of for several years.  She grew up in Italy with her parents and two older sisters. After graduating high school she studied at the University of Parma where she completed courses to become an equine breeding technician. She also began working for a well-known fast food restaurant at this time. She began to save the money she earned to achieve her long time dream of owning a horse. In September 2008 that dream came true when she had saved enough money to purchase an 8 year old gelding named Kevin. She said, “He’s been so good and patient with me ever since we met.”

During this same time Marta also began to work at a small stable near her home that housed 25 horses. The facility was owned by the Ferrari brothers, the eldest of whom is Simone. Simone had grown up producing jumping horses but after awhile they decided to begin producing a different breed of horse, the Apennines horse (photo above with Marta).

Marta and Simone have added Puro Sangue Arabo (PSA) arabian horses to her stable. For the moment they have only two mares: one is the daughter of FS Bengali and two-year-old Athena (photo below; ZT Marwteyn x Magnum Silhouette) who was imported from Denmark. The former delivered her second foal last May while Athena was taking part in two international morphology shows where she obtained the right to participate in the World Championship in Paris. 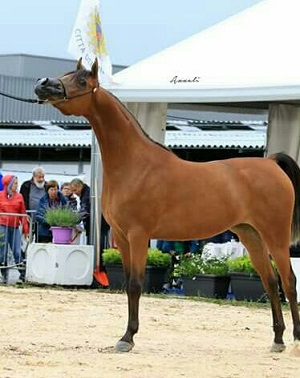 It’s because of her horse, Kevin, that she met Dr. Roberto Casaroli, one of the founders of Studio Veterinarian Associato Luretta). He gave her advice on how to properly manage her horse and eventually offered her a job. After his offer, she left her job in the restaurant business and began her dream of working with horses. Dr. Sandro Barbacini joined Luretta just three years later and now she works alongside him in the reproduction department. Marta said, “Dr. Barbacini is a man I had always heard of as the ‘guru’ of equine reproduction but I had never had the pleasure of meeting him until now.”

Marta’s responsibities at Luretta include the management of mares and stallions as well as semen collection. She is also in chage of maintaining the storage of frozen semen at their facility as well as the distribution of both cooled and frozen semen. Marta said, “I felt overwhelmed at first, having to learn all the procedures and practices that govern a large international company like SBS but now I feel at ease with everything I have learned and honored to work for such a renowned company.”

When she is not at the clinic she loves to read thriller books and cook, especially baking cakes. Also, twice a week she takes horse riding lessons and is committing herself to dressage with the hope of taking part in her first competition soon. She considers herself very lucky because she was able to turn her passion for horses into her career and is lucky to have met people who helped her achieve her goals.