Results from Dressage at Devon 2011 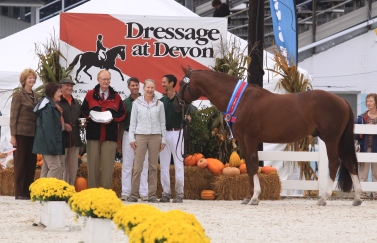 It was definitely an exciting week at Dressage at Devon and SBS would like to congratulate our clients who participated in the week long breed and performance show, September 27th - October 2nd. Don Principe, owned by Maryanna Haymon and Harmony’s Baroncelli, managed by Hassler Dressage, both competing in the Grand Prix and Grand Prix Freestyle. Bugatti Hilltop, owned by Hilltop Farm placed in the top 10 in the PSG with his rider’s first time out in a CDI. Don Hill, owned by Virginia Leary and managed by Hilltop Farm (photo left), placed 1st in the 4 year old and older stallion class.

Congratulations to all our clients and breeders! For complete placings and scores go to: www.dressageatdevon.org.