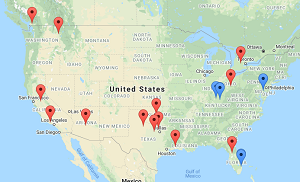 Paul Loomis’ vision of creating a company dedicated to the responsible development of the equine frozen semen industry has taken several creative turns.  Most notably are his first partnership in a facility in Texas and the implementation of the SBS Affiliate Laboratory Network which is celebrating its 20th Anniversary this year.  Formerly incorporated in 1987, Select Breeders Services, LLC (SBS) has grown into an internationally recognized leader in the industry of processing, storing and distributing equine frozen semen.

The first major expansion of SBS was the partnership between Paul Loomis and Whit Byers in 1992 when they created Select Breeders Southwest, Inc. (SBSW) in Aubrey, Texas.  With Paul in Maryland and Whit in Texas, there was still a lot of the country which did not have access to quality equine frozen semen processing.  As a result of Whit’s vision and willingness to travel the country, the industry’s first fully equipped mobile laboratory was put into service in 1994.  It traveled all over the United States to offer the same technology and expertise that was offered at the main laboratories in both Texas and Maryland.  It would be traveling up and down the highways nine months a year from coast to coast and border to border to bring SBS services to clients.

As Whit was traveling the country, Paul was also working tirelessly to build the brand of Select Breeders Services.  Though he mainly worked from the lab in Maryland, he would also travel internationally to process frozen semen for several clients.  This would entail “checking” his laboratory equipment as baggage on flights, finding suitable lab accommodations in a foreign country and days or weeks of travel.  After traveling to Italy in 1998 to freeze semen on several Standardbred stallions, Paul and Sandro Barbacini of Studio Veterinario Cristella partnered to form SBS Europe.  Select Breeders Services would later expand into Australia when Paul Loomis, Ed Squires, Angus McKinnon and Jim Vasey partnered to create SBS Australasia in 2002. 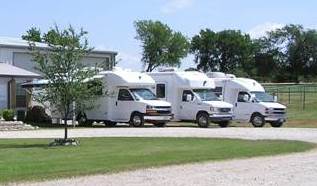 In 2000, two of the largest breed associations in the world (American Quarter Horse Association and the American Paint Horse Association) began to allow the registration of foals conceived by frozen semen.  This led to an explosion of growth for SBS but especially in Texas at Select Breeders Southwest.  The vast population of these breeds in North Texas resulted in the need for Whit to remain closer to home rather than traveling the country in the mobile laboratory several months a year.  As the popularity of frozen semen grew and the demand for SBS services increased it became increasingly difficult to efficiently service clients scattered around the country.  Work with the mobile lab and travelling to other clinics to provide freezing services identified regions of the country where sufficient demand existed for a more permanent solution for clients. Thus, the SBS Affiliate Laboratory Network was born.

From its inception, the goal of the SBS Affiliate Network was to bring SBS semen freezing and related reproductive services to breeders throughout the US and abroad to improve the results with commercial equine frozen semen.  These goals would be accomplished by partnering with veterinary clinics and large commercial breeding operations and implementing standardized semen processing protocols and employing strict quality control standards for the production of frozen semen.

The first to join the network in the United States was Dr. Phil Matthews of Peterson & Smith Equine Reproduction Center in Ocala, Florida.  When asked why he joined the SBS Affiliate Network Dr. Matthews said,

“We felt it was a way to ensure we were practicing state of the art technique in freezing semen.  While we felt we currently offered the service adequately we knew there was significant room for improvement and it is always our desire to maximize positive results for our clients.  We not only saw SBS as an avenue to bring us to the forefront of the latest methodology and equipment but we were very interested in participating in their commensurate quality control measures to be certain we continued to offer a great product for our clients.”

Benefits of being a member of the SBS Affiliate Network include hands on personal training, standardized procedures, quality control, frozen semen storage and distribution, continuing education, research and development and technical support.  When we asked Dr. Matthews what he felt the biggest benefit has been to his 20-year membership in the SBS Affiliate Network he said, “I won’t even attempt to identify just a single benefit.  The initial training provided to our new technicians and the continuous access for questions and troubleshooting is so very helpful.  The quality control that is in place is essential to a well-run program.  The resource provided for export questions and issues has been very helpful.  The annual meeting which provides networking and the latest in research has always been welcome.  And finally, it’s the affiliate network itself that has provided clients and business, resources and a trusted source of expertise and frozen semen for us and our clients.”

Click here for more information about the SBS Affiliate Network, the benefits of being a member and how you can join!

Quality Control is at the Core of the SBS Difference