SBS Agreement with Paul Schockemöhle for the Italian Market

Posted by SBSI in Affiliate News

SBSItalia is pleased to announce to the Italian sport horse breeders that we have reached a strategic agreement for managing the frozen semen of Paul Schockemöhle’s (photo left with Totilas) stallions. The agreement will be operational beginning in 2015 and was achieved thanks to the contribution of Mr. Schockemöhle’s Italian partner, Matteo Delmiglio. He will take care of all marketing aspects related to breeding sales while SBSItalia will be solely responsible for the logistical aspects regarding the import, storage and distribution of frozen semen from the entire stallion catalog of this prestigious German breeding farm. Also, breeders will be allowed to bring their mares to the two Italian SBS Affiliate Laboratories, SBSItalia and Centro di Riproduzione Equina Centauro, to be inseminated with frozen semen of particular stallions which are currently only available if bred at Paul Schockemöhle’s (P.S.) facility in Mühlen, Germany.

Within a very short period of time the stallion station of Paul Schockemöhle has developed into one of the world's most successful and frequented stations. As the discoverer of Sandro Hit, P.S. succeeded in building up a new stallion line with great success. Most of the stallions are still competing. Breeders can choose among German National Champions (Sir Donnerhall and Cornet's Stern), World Champions (Totilas and Sandro Hit), approval winners (Diarado; photo below and Fürstenball), an Olympic Champion (Dobel's Cento), World Cup winners (Sandro Boy) plus many more.

The world-class sires Baloubet du Rouet, Kannan and Quick Star began their breeding careers in Germany at P.S. station. They placed first, second and fourth at the WBFSH-world ranking of the best jumper sires. Their progeny have achieved numerous highlights with the Olympic victory of the Kannan son in London being the most outstanding thus far. 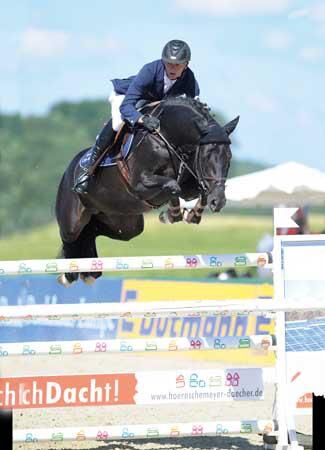 At his stud in Lewitz, which is wonderfully located in the Mecklenburg countryside, Paul Schockemöhle breeds approximately 1000 carefully selected mares. Most of the horses are bred for show jumping with only 15 percent of them being bred as dressage horses. He strategically built this facility which includes its own veterinary clinic and huge meadows for the healthy rearing of foals and is the basis for his success. Paul Schockemöhle is considered one of the greatest breeders in Europe.