Stallion Owners Should Explore Opportunities in Europe and the Middle East

Stallion owners in the United States have the potential to increase their income and the number of foals born from their stallions each year by exploring the breeding industries in Europe and the Middle East. The equine breeding season for these destinations as well as other northern hemisphere countries takes place at the same time as the breeding season for the United States. For some stallions, the demand for their offspring in one of these countries may be equal to or greater than their popularity within their home country. This is where the exploration of a foreign market could prove to be beneficial. European countries send approximately 25% of the visitors to the SBS website. So if you would like to market your stallion, which was frozen by an SBS Affiliate Lab, to the markets in Europe and the Middle East be sure to post and/or update your stallion profiles on our SBS Stallion Guide.

Exporting the stallion himself to a foreign country within the Northern Hemisphere to accommodate their breeding season is not a viable option because of the fact we share the same breeding season. The best option is to have his semen frozen and then shipped to a foreign destination. Select Breeders Services (SBS) and its Affiliate Laboratory Network assist stallion owners and mare owners alike with the reality of having foals born in Europe as well as many other countries in the Northern Hemisphere (Saudi Arabia, Israel, etc.) without the stallion ever leaving the ground. Many stallion owners choose to bring their stallions to our facilities during the off breeding season (July – December) 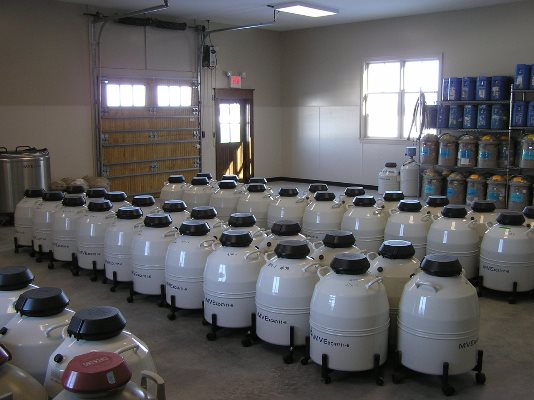 which allows ample time to collect and process the semen as well as have it shipped to its final destination in time for the start of the breeding season in the destination country. Keeping in mind that some countries, as with those within the European Union, require the frozen semen remain in the United States for 30 days before it can be shipped.

Facilities within the SBS Affiliate Network are approved to export equine frozen semen to Europe and most Middle Eastern countries. Most of the frozen semen shipped to such countries from SBS (tank storage room pictured right) in Maryland and Select Breeders Southwest (SBSW) in Texas has been from Quarter Horse reining and western pleasure horses, Arabians and warmblood sporthorses.

Once the decision is made to have frozen semen qualified for export it is best to contact a facility which is well versed in the process. Many SBS Affiliate Labs send several shipments to Europe and the Middle East each year and are familiar with the health testing required at the time the semen is processed as well as the documentation required to have it clear customs without issue at the destination airport. You can find additional information in our article about Exporting Frozen Semen From the United States, contact us via phone at (410) 885-3202 or email for more information about processing frozen semen for export and the export shipment process. You may also wish to contact your local SBS Affiliate Laboratory for the information you require.

A major benefit of using the SBS Affiliate Network is confidence that your stallion’s frozen semen will be stored and distributed with the same high quality and standards you experience with your local SBS Affiliate Laboratory. The destination country for frozen semen exported from our US facilities may depend on the breed of the stallion. Although any breed can be shipped to any of our European facilities it may be best to ship the semen to a facility where there is a greater concentration of your target breed. For instance, the majority of the Standardbred semen shipped from the United States to Europe is either sent to Studio Veterinario Associato Luretta in Italy or Caballa in Sweden where there is a higher concentration of standardbred mares. Whereas, the majority of Quarter Horse semen is shipped to either Equine Services (photo left) in Germany or Studio Veterinario Associato Luretta  in Italy where the majority of the Quarter Horse mares are located. Other SBS European facilities which can receive SBS processed frozen semen from the United States are: Knocke Arabians in Belgium and Centro di Riproduzione Equina Centauro in Southern Italy. An additional example would be that a great number of frozen semen doses from Arabian stallions are exported to Middle Eastern countries.

Mare owners may consider breeding to your stallion if his semen is already being stored at any one of our European labs. With the semen in the EU it can be ready and available to ship domestically which makes it easier for a mare owner to choose your stallion rather than going through the import process themselves. Click here for a list of Quarter Horse, Paint Horse and Appaloosa stallion frozen semen (processed by an SBS Affiliate Lab) available at our affiliate labs in Europe. Our European labs are ready and waiting to assist you whether your stallion’s semen is already frozen and qualified for export or you have questions before you take the next step.

Another advantage of using the SBS Affiliate Laboratory Network to freeze and qualify semen from your stallion for international distribution is the possibility of combining frozen semen from more than one stallion, or for more than one client, into a single shipment. Thereby some of the costs of the export can be shared by those clients sharing the tank.

SBS utilizes shipping containers which can hold as little as one dose or as many as 200 doses. We also have many shipments travelling to foreign destinations throughout the year. By coordinating and combining stallions/clients going to the same location into one container saves our clients on some of the costs associated with the export of the frozen semen. It is to your benefit to share a shipment whether you are stallion owner wishing to send enough semen to store in Europe for twenty mares or a mare owner in Europe who only needs enough semen for one mare. Christi said, “We always try to get in a bulk shipment as it gets the costs per stallion minimized…We all want to save money!”

Please note: SBS can only export frozen semen that has been processed and stored at an SBS Affiliate Lab.

We look forward to assisting you whether you are at the exploration phase to determine if a foreign market is for your stallion or you are ready to begin the process. If you would like to share a shipment to the European Union please contact us via email or phone (410-885-3202).