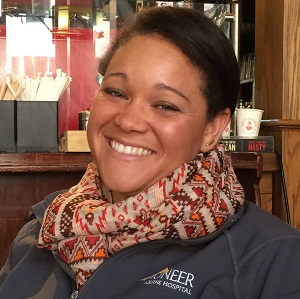 Kamaria Kuhn (photo left) is a Reproduction Technician at Pioneer Equine Hospital (PEH), an SBS Affiliate Lab in Oakdale, California. Born and raised in the Silicon Valley, she didn’t know she was born with the “horse gene” until she was eight years old and went with a friend to a horse show. With a chuckle she said, “It was all downhill from there!” That’s when all other activities and sports became a part of her past and she began riding horses. She knew from that point forward she was going to be happiest in a career working with horses.

Growing up she rode English with aspirations of becoming an Olympian in Eventing. She soon realized the Olympics might not be in her future so she has enjoyed the opportunity to show her first horse to 2nd level and her event mare to training level for the better part of 10 years. However, she was introduced to the sport of cutting and has been showing cutting horses for the past three years. She currently owns three horses including her very first horse, Darian, who is now 20 years young. Her event horse, Holly, has become a recipient mare for her second cutting horse, Frannie. Unfortunately, her first cutting horse named Bitty (photo below), which was a college graduation present to herself, passed away last year.

Kamaria received her Bachelor of Science degree in Animal Sciences, with an emphasis in Equine Production, from California State University in Fresno. Then in 2013 she graduated from Modesto Junior College with an A.A. of Veterinary Technology. Within the year she will sit for her boards in veterinary technology. She didn’t seek out a position with an SBS Affiliate Laboratory after graduation but now that she is working for one she couldn’t be happier.

She has been with PEH for 4.5 years where she began working in the pharmacy. She was anxious to become a technician so when staffing changes occurred two and a half years later she jumped at the opportunity to become a reproduction technician. Besides being the support staff for Dr. Kevin Hyde, she is responsible for everything related to the stallions such as their management, shipping/receiving semen, processing frozen semen, the inventory of the frozen semen, collections, client communication, etc. 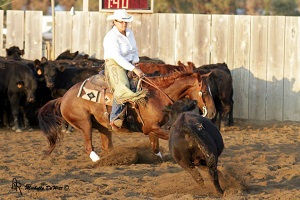 Prior to becoming a team member at PEH she spent her time grooming for professional horse trainers, helping kids as a counselor at horse camp and in her words was a “self-proclaimed” horse trainer extraordinaire. When asked what it is she loves most about working with horses she said,

“I enjoy the partnership and the trust we get from them. Horses are incredible creatures to be around.”