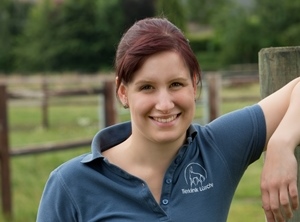 Maike Dueser (photo left) grew up in the countryside of North Germany near the city of Bremen. She has loved horses since a very young age. Thus, it’s no wonder she has made a career of working with them. In 2013, she began working for the Select Breeders Services (SBS) Affiliate Laboratory in Bakum, Germany. SBS North Germany is part of equine vet clinic of Tierklinik Lüsche.

When she was six years old she convinced her mom it was time she owned her own horse. Yet, this wasn’t just any horse. He was a Shetland Pony who was very skinny and had a skin disease. The owner of the pony wanted to put him to sleep until Maike convinced her mom to purchase the pony. Maike named him Luigi. She cared for him day and night until he was back in good health. Luigi (photo below right), who was destined for death, made a complete recovery and remained with Maike and her family for 17 years until he passed away.

Maike began working as a vet assistant for the Tierklinik Lüsche in 2011. It was during this time that she became familiar with the services provided by SBS and took an interest in learning more about equine reproduction. In 2013, she began to gradually make the transition from working for the vet clinic to being a technician for SBS North Germany. 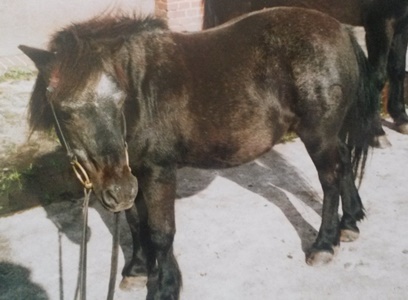 Though she does still assist the clinic as needed her main responsibilities include collecting and freezing semen, processing frozen semen shipments and caring for the stallions at their facility. When asked what she enjoys most about working with horses she said, “Training young stallions to collect off the phantom and to see foals born which were the result of semen processed by SBS.”

She has never ridden horses for competition but rides for fun. She does so with the two horses she currently owns. One is an Icelandic Horse named Loa and the other is a pony mix named Flicka. When she isn’t working she is either riding her horses, hanging out with friends, playing with her mixed breed dog named Socki, reading a good book, shopping or spending time with her family.