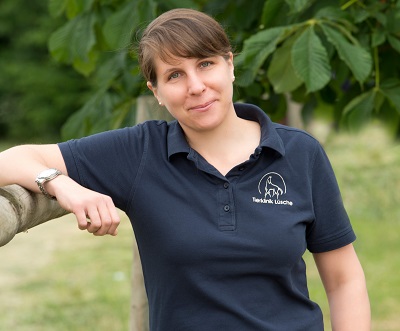 Ute grew up in a rural suburb of Bremen, Germany and began riding horses when she was 10 years old.  She would have loved to own her own horse as a child but she didn’t. However, she would provide riding lessons to children at the local riding stables and in return she was allowed to ride and care for one of the private owned horses as well as the lesson horses.

It wasn’t until Ute had a paying job and began earning her own money that she and a friend partnered together to purchase a broodmare. That mare was named Welfin (photo below; Weltmeyer out of an Augustinus XX dam). They bred Welfin for eight years and enjoyed welcoming seven of her foals into the world during that time. They decided it was time to retire her to pasture when she began to develop complications after birth that seemed to escalate each subsequent year. Welfin now spends her days relaxing in the pasture.

She didn’t grow up with a strong desire to work in the horse industry but knew she didn’t want to sit in a cubicle each day from 9 to 5. Ute said, “Veterinary medicine was an ideal chance to combine my interests in scientific and medical work with my interest in animals and with the possibility to work in varying environments with different people to meet and different places to see.” During her last year of veterinary school she enjoyed working with both cattle and horses. It wasn’t until she had the opportunity to work at Tierklinik Lüsche that she decided to work strictly with horses. 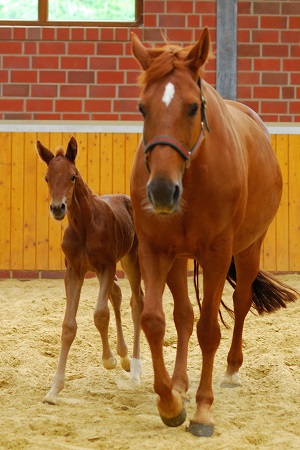 Ute began working at Tierklinik Lüsche in 2003 as an extern while she was in vet school, and graduated from the University of Veterinary Medicine in Hannover, Germany in 2004. It was at this time that she took a position as an assistant veterinarian with Tierklinik Lüsche with an emphasis in reproduction. The clinic offers a wide range of diagnostics and medical treatment with their main focus on orthopedics and sport horse medicine. Ute rotated through all of the departments but kept her primary focus on reproduction and internal medicine.

In Germany, a graduate from veterinary school is not automatically awarded a veterinary degree upon graduation from vet school. Ute wrote her doctoral thesis on the ‘Clinical Investigation for a Prospective Classification on Subfertile Mares Under Field Conditions’ and consequently received her doctorate of veterinary medicine in 2007. She then followed that up with becoming certified as an equine specialist in Germany in 2009.

In 2015, Dr. Pansegrau became head of SBS North Germany. Her responsibilities include client relations, trouble shooting issues and she oversees their in house quality control program. SBS North Germany offers a wide array of services including breeding soundness exams, mare inseminations, embryo transfer, high-risk pregnancy monitoring, foaling, and phantom training as well as medical and surgical treatment of neonatal disorders. They also specialize in breeding the problem mare. These services are offered both in the clinic as well as on two large private stud farms in their area. When not performing reproductive services, Ute focuses on cardiac and respiratory diagnostics and medicine as well as neonatal and foal medicine.

When Ute is not working with horses she enjoys spending time outdoors hiking and bike riding. She also enjoys traveling, reading and cooking with/for her friends.  Her biggest trip so far was the three weeks she spent traveling throughout South Africa.  Next on her list would be a trek through the Southeast Asian countries of Vietnam, Laos and Cambodia or Sri Lanka.