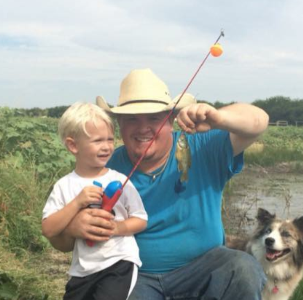 Zach Kahn from Houston, TX is a member of the team at Select Breeders Southwest (SBSW) in Aubrey, Texas. While attending college he participated in a research project which included stallions he managed at the Texas Tech University Ranch Horse Center. This project led him to SBSW where he became intrigued with all of the technology used at SBSW and the knowledge he acquired while at the facility.

Although he did not grow up owning any horses of his own Zach (pictured left with nephew, Scotty) attended an equestrian camp during the summers between his 1st and 5th grade years of school. During camp he would ride reining horses but as he got older his interest in racing Quarter Horses grew. This led him to racing and breeding race horses while attending Texas Tech University.

During his high school years and part of college he worked at the same summer camp which helped him gain experience working with horses. Throughout college he also worked with the Texas Tech Rodeo Team, Texas Tech Equestrian Center and was the ranch manager for the Texas Tech Ranch Horse Center. He received his degree in Animal Science from Texas Tech in 2007. It was then in May 2008 that he joined SBS as the farm manager and a freeze technician at SBSW. Some of his responsibilities at SBSW include breeding mares, managing stallions for cooled semen, processing frozen semen, assisting with frozen semen shipments, etc. He also spends time processing cooled and frozen semen in the mobile lab. When asked what he enjoys about working with horses he said,

“I like how each horse has their own personality. They are like a puzzle that you have to figure out. Some have lots of pieces and some are pretty simple.” 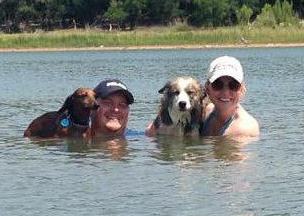 There are a few interesting things about Zach which some people may not know. His working at SBSW is what led him to meet Susie (pictured below with Zach, Buddy and Lexy) whom he married in 2014. His dream job when he “grew up” had nothing to do with horses. Though he has always enjoyed agriculture his dream would be to work in the culinary arts. He also attended college in Israel for 5 months in 2001-2002.

When he is not working with the mares, stallions and foals or on the road in SBSW’s mobile lab he enjoys fishing, working in his vegetable garden, painting pictures and creating delicious meals. That is when he isn’t working on the many projects he has at the farm he and Susie purchased in June 2015. Together they have two dogs (Buddy and Lexy; pictured here) and reining broodmares. Zach doesn’t have to think about what do to next as he is kept pretty busy between breeding season, freezing season and projects at home.