Congratulations to Our Clients - October 2011 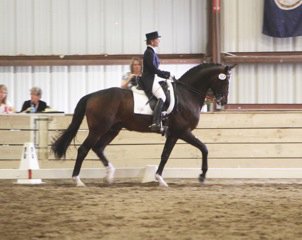 Congratulations to our clients who share the following success stories with us for October of 2011. Opposite is a photograph of Susanne Hassler and Baroncelli, they won the Grand Prix championship at the East Coast Regional BLM Championships, October 15-16. Baroncelli is managed by Hassler Dressage.

Congratulations to Bob and Pam Loomis! Their stallion Topsail Whiz has become the first ever $8 million reining horse sire. Although Topsail Whiz passed away in 2009 at the age of 22 his legacy lives on through the use of frozen semen. For more info click here.

Spat Split And White (Spat Olena X Arc Joy Surprise by Sophie Oak) owned by Le Colombare QH and ridden by Max Ruggeri won the $10000 added money NRHA Open Trophy held in Caluso (Torino, Italy) on 22nd October! Max won with an awesome score of 153.5 . Congratulations to both rider and owner for another success. Spat Split and White recently had his semen frozen for distribution by SBSItalia. Congrats also to Claudio Risso for owning the sire Spat Olena whose semen has also been frozen by SBSItalia.