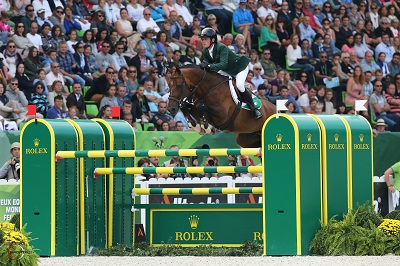 Horses have been a part of Vicky Castegren’s life since she was 9 years old. In 1999, she moved onto her first farm but after several years of riding and showing she decided to take some time off to start a family. After the birth of her first child she had four mares due to foal and realized her current setup would no longer meet her needs. So, in 2009 she purchased a new farm in Barboursville, VA which had facilities for breeding mares and stallions. She jumped right in with both feet and it didn’t take long for her business to evolve into what is now known as Hyperion Stud. Today, Hyperion Stud consists of three facilities in which to breed, train and sell sport horses as well as offering superior stallion services. The facilities are the main farm in Barboursville, a turnout facility in Madison, VA and a training facility in Wellington, Florida.

The mission of Hyperion Stud has always been to bridge the gap between the European and American Sporthorse markets. They search for special stallions and mares which can improve the breeding industry within the US as well as be successful in the show ring. Vicky said, “It’s always about producing the best you can with the mares and stallions you have or have access to. In North America this is not always such an easy task but we feel we have done that and continue to do so.”

Since it’s inception Hyperion Stud has had many notable accomplishments, the greatest being the success in sport and breeding with their stallion, Imothep (photo above; Indoctro x Calvados). Vicky said, “He ticks all the boxes for a stallion and is an elite athlete. He was the first stallion I ever bought and what a success story he has been! In 2014, he finished 12th overall at the World Equestrian Games in Normandy, he was fully licensed by the KWPN and in 2015 he was Horse of the Year with the KWPN-NA.” 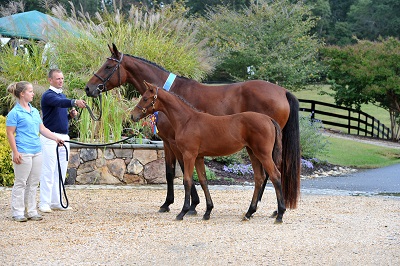 Though Imothep could be considered the ‘face’ of Hyperion Stud there are other Hyperion Stud stallions which are achieving great success. Two of these stallions include Dakota VDL (Casall x Contender) who is approved with Belgian Warmblood Registry (BWP), Royal Dutch Warmblood (KWPN), Oldenberg (OL) and American Holsteiner Horse Association (AHHA) as well as Chin Quidam VDL (Chin Chin x Quidam de Revel) who is approved with the AHHA. These horses have been very successful in the show ring as well and continue to “climb” the ladder. Carrasca Z (Asca Z x Calato), a stallion who was bred by Hyperion Stud and sold to AliBoo Farm as a foal, was approved by the Zangersheide Studbook in Belgium. This marked the first time an American breeder has ever had a stallion approved by this particular studbook. Vicky said they are very proud of this acknowledgement. She also pointed out they have mares who have received their 'Elite' status and 98% of their foals are premium (photo above right is AHHA Site Champion Danke Schoen HS and her premium foal Helia HS) each year with some being champions.  The foal in the photo below is Champion Holsteiner colt, Caspian HS, by Cachas.

Hyperion Stud has had the opportunity to work with several SBS Affiliate Labs. Two in Florida (Peterson and Smith Equine Reproduction Center PSERC in Ocala and Reid and Associates Equine Clinic - RAEC in Loxahatchee) to freeze semen from their own stallions and Select Breeders Services (SBS) in Maryland for the distribution of semen in which they act as agents for other owners. Vicky had this to say about SBS and it’s affiliate laboratories,

“SBS has nailed it. They are specialists! I’m grateful to have access to them and their associates. I called SBS when I was looking to freeze semen for export. They gave me the information I was looking for, provided several options and information for places I could do it with. I believe the sharing of information never leads your business away but only strengthens the relationship with the client. I’m always glad to work with SBS.” 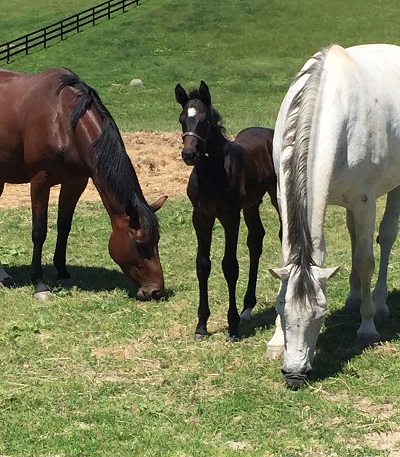 They utilize both fresh and frozen semen in their breeding programs. Vicky feels there are many advantages to using frozen semen. One in particular is the fact you can order the semen in advance and have it waiting in the tank for when the mare needs to be bred. She also discussed the protocols they use to breed their mares with frozen semen. Vicky pointed out, “When using frozen semen our protocols differ from mare to mare. We use frozen semen on mares that we have a relatively good history on (unless we’re breeding a mare we’ve bred starting at age 3 or 4). Some are more fertile than others and frozen is never a problem. However, if we do have a problem, it doesn’t mean I won’t try again. Everything has to be just right when you’re playing with Mother Nature. So a healthy sound mare and a great reproductive vet are essential!”

Vicky mentioned she believes breeders need some help and more confidence in breeding with frozen semen. She said, “Too often I get feedback from mare owners who want to blame the quality of the frozen semen (even when it’s above the normal standard) for lack of pregnancies or problems with the inseminations. We all play a game of risk when breeding horses but it’s important to use qualified vets who have strong records of success when using frozen or fresh semen. I think it’s very important to use services that are reputable and have a top record for success when breeding. We all have to weigh the risk but it can be minimized by using the proper professionals to do the job like those at SBS.”

Whether it be in the show ring or the breeding barn, Hyperion Stud is sure to continue to help improve the Sporthorse industry through their services and by providing education to other breeders.