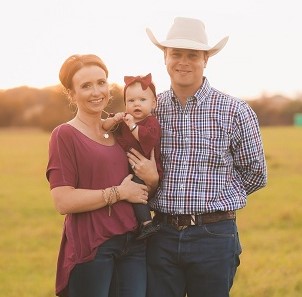 Patrick Rollins has been a part of Select Breeders Southwest (SBSW) since January 2010 after receiving his Bachelor of Science Degree from Texas Tech University.  As Senior Freeze Technician, he is responsible for many aspects of the operations at SBSW. They include processing frozen semen in both the main lab and the mobile lab and overseeing the collection and processing of cooled semen as well as the processing of semen using EquiPure. During the breeding season, he enjoys spending time with the horses while overseeing the mare management services provided by SBSW. The storage and distribution of the frozen semen at SBSW is also under his watchful care.

He enjoys his job in the laboratory but it is no wonder that his true desire is to be outside in the fresh air working with the horses. His younger years were spent moving to the different ranches his dad was managing while his mom worked as an elementary school teacher. After his parents divorced, he would live with his mom in Tomball, TX where she taught school but then each summer and any other break he had from school would be spent out in the pastures working with his dad on the ranch. He can’t remember a time when he wasn’t around horses. Prior to coming to work for SBSW, Patrick spent time on several commercial cattle operations in Texas, New Mexico, Arizona, Florida and Oregon. Horses and the outdoors are in his blood as even his uncle is an equine veterinarian in Magnolia, Texas. He said,

“Working with horses has always been satisfying for me. I guess it gives me a calming type of feeling. When I start colts, it is gratifying to create a usable, trustworthy horse or get something good out of troubled horse. Horses have always been in my life, so it would feel strange if I wasn’t around them.” 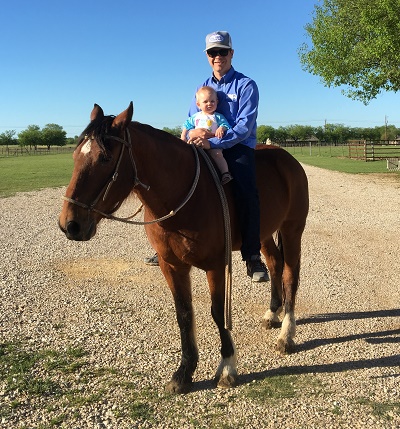 There wasn’t a need for Patrick to purchase his own horses when he was young because he would ride the horses owned by the ranch where his dad worked. It wasn’t until he was about 16 years old that he owned his own horse. That horse was a Mustang (photo right with Patrick and Karlee Jo) that he brought back from Arizona after he had participated on a spring branding wagon on a ranch. Now he and his wife, Jena, keep about 4-5 geldings as she likes to spend her free time barrel racing.

Most of Patrick’s free time outside the office is spent with Jena and their one year old daughter, Karlee Jo. However, he also enjoys roping as well as starting colts and preparing horses for ranch versatility type showing. He has been doing so since the age of 13 but hasn’t ever had the desire to compete in the show pen even though he has entered the show ring a few times. His true passion lies in making sure a young horse has a good start.

So, be sure to say hi to Patrick if you are visiting our facility in Aubrey, Texas or wave hello should you see him heading down the road in the mobile laboratory through the middle of the country.

Photos provided by the Rollins Family