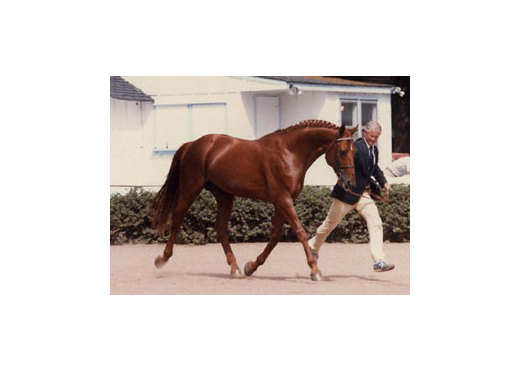 Adamant was a stallion who had an amazingly good nature. He was even tempered to the extreme, very intelligent and a reliable undersaddle horse. His focus was excellent and he consistently produced offspring with great tolerance, patience and good paces. Adamant’s offspring were often sold to or bred by adult amateur riders who had little experience with youngstock. Most were started without any professional assistance and went on to have great success with their owners as their primary riders.

Over the years Adamant was often overshadowed by his more flamboyant barn mates Able and Ready and Again and Again. Those two stole the show with their outstanding jumping talent and stupendous movement, while Adamant continued in his diligent and responsible fashion to draw attention for being such a solid citizen. In the course of his career he accumulated many Year End Awards, several in hand Reserve Championships and was the family favorite for fox hunting. Adamant competed with very good results through Intermediare I and was trained through Grand Prix.

His offspring are best known for their steady temperaments, good movement and tolerant natures. When they are under circumstances that would tax most horses’ ability to behave, his get are disdainful of such shenanigans ... they would never participate in such behavior!

Adamant’s son Avebury WF was licensed for breeding in 2004 and has continued to bring honor to his sire’s reputation. Atreo WF has steadily progressed up the levels in dressage after having very good success in the sport horse breeding venues. As You Wish WF is currently enjoying great success in eventing. Beltane, who was bred and is owned by Sally Cousins, is also having another excellent year as an event horse. In the mid 90’s, Ariadne won the North Georgia Three Day with a junior rider – who just happened to be the teenage daughter of her breeder!

Adamant campaigned steadily up the levels through Intermediare I with numerous Year End Awards to his credit. He was a reliable horse in competition - very steady, consistent and pleasing to the eye.

He consistently passes along a willing nature, good movement, length of leg and a good engine.

Adelaide WF with her owner @ DAD