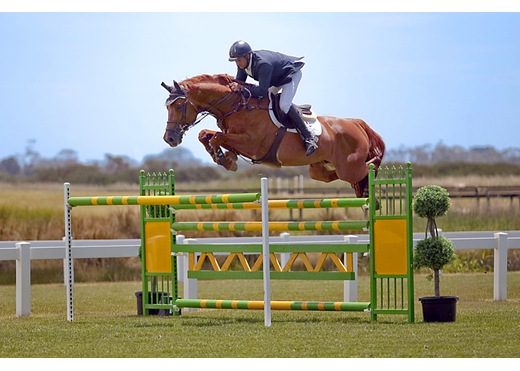 Carrado was imported into New Zealand as a yearling. He is an athletic young stallion and an outstanding example of his Holsteiner genetics. Carrado has an incredible jump with huge scope! He is careful and powerful and he loves to jump!

With 83% Carrado MVNZ was the top stallion and overall top scorer of the Australian Classification Tour 2017. He was awarded with a Premium/Excellence Rating.

Carrado is by the Elite Holsteiner stallion Cassini II. A full brother to Cassini I. Cassini II was approved in 1996 with a high jumping index and placed third in his jumping ability. He had high scores for character and temperament.

Cassini II produced modern, athletic types and his progeny have successfully competed at the top level. He has many approved sons and daughters.

This is one of the oldest and most proven motherlines in Holstein. This family have been responsible for no less than fifty approved stallions including Cristallo, Cordano Z, Chambertin, Leonardo 1 and 11, the Corrado son Cliton and the Landgraf son Linaro.

Carrado's family on both sides, boast many Grand Prix horses with much talent! Carrado has inherited the scope and power of the families he was born into.

Carrado's oldest progeny are now 4 yo and showing a lot of talent. They have their sires scope and athleticism and are a pleasure to work with.

Carrado is a modern, leggy beautiful type. He is a very talented athletic stallion. He is a serious jumper for the big classes!

Carrado's oldest offspring are 6 yo.

This group are looking very exciting as they show a lot of talent over a jump and they are very good to work with.

Carrado has passed on his scope, athleticism and ability over the jump.

Carrado brings exciting possibilites to jumper breeders in Australia and New Zealand. Already we are seeing some very talented youngsters. He is exciting for breeding!