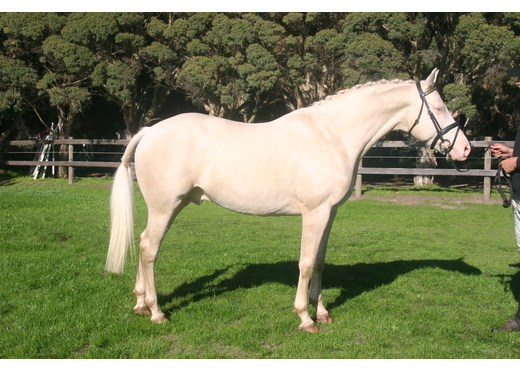 Goldmine Illusion has a double cross in his pedigree to the amazing bloodline of Claredale Champagne Charlie. ‘Charlie’ was one of the best performed palomino stallions to ever enter the show ring and arguably the most influential sire of palominos in Australia. Charlie’s sire, Desert Gold, was a palomino stallion that successfully competed in dressage, show jumping and in the show ring and Charlie followed on by having a successful dressage career, training up to Prix St George level.

Illusion is by a son of Charlie, Goldmine Ashanti Gold, a superb palomino stallion who was bred by Jan and Collin Lovett of Goldmine Stud in Sunbury Victoria. Ashanti was legendary for his wins in the show ring, being the most decorated palomino stallion in several states, winning many championships in both led and ridden. Ashanti won his first ridden event at the Palomino State Championships, ridden palomino stallion, shortly after being broken to saddle as a 9 year old. Interestingly to note he only spent one week at the breakers and was sent home as being broken in and safe to ride, which goes to prove he had a truly outstanding quiet trainable temperament. He certainly passed this on to his foals.

Charlie’s progeny have been sold around Australia and overseas and are used for just about everything. Illusion is a pleasure to work with in every way. He works beautifully under saddle and is always a gentleman to handle. His head turning looks and incredible temperament really make this stallion stand out from the crowd.

As a bonus, Illusion is a 100% buckskin or palomino producer to all mares excluding greys. He will produce a dilute foal to cremello and perlino mares.