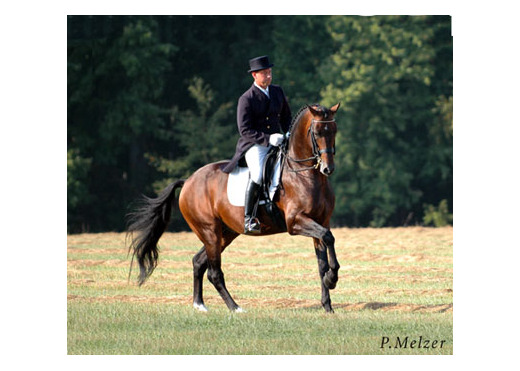 Our flagship stallion Rousseau, occupies a prominent place in our hearts and our aspirations, having managed him into his supremacy as an international breeding stallion. Rousseau’s remarkable success is exemplified by the fact that out of his first four foal crops in the Netherlands, Rousseau produced three consecutive Champions of the KWPN Stallion Licensing: Wamberto (2006), Blue Hors Zack (2007), and Ampere (2008). From his first foal crops in Germany, Rousseau has four licensed sons: Fiorano named to the Premium Ring of the 2008 VhW licensing, Fuerst Rousseau now standing at Celle, a Rousseau-Lauries Crusader licensed in the late 2008 Hanoverian korung and Rousseau Noir, licensed by the GOV. Three of Rousseau’s sons won their stallion performance tests with record-breaking results, Wamberto, Fiorano, and Ampere! With National Champions in the Netherlands, USDF National Champion titles here in the US, and offspring performing at the top of their peer groups at CDI’s around the world, Rousseau’s impact is proven. A top class stallion who consistently produces top class offspring, Rousseau is readily available to North American breeders for fresh, cooled semen services; we proudly offer his frozen semen services to breeders around the world with ready inventories waiting in Europe.

2003 KWPN Stallion bred by Jelke and Linda Heida, The Netherlands

2004 KWPN Stallion bred by B. Wilschut, The Netherlands

Third successive KWPN Stallion Licensing Champion for Rousseau at 2008 KWPN Stallion Show in Den Bosch (under the name Ajong)
Owned by a partnership between Tamerus Beheer, Nico Witte and Reesink Horses
Champion of the Spring 2008 KWPN Stallion Performance Test in Ermelo at 8 points ahead of the reserve stallion
Earned 9.5 for his canter and 9′s for the trot, suppleness, rideability, and potential, finishing with a total of 88.5 points

Earned KWPN license at the 2007 Stallion Performance Test at Ermelo
Performance Test Scores of 9 for trot, suppleness, and suitability as a dressage horse
Overall score of 85
Purchased as a yearling by British WEG team rider Wayne Channon

Named to Championship ring at Fall 2007 VhW Licensing and titled a Premium stallion of the licensing
Champion of the August 2008 70-Day Stallion Performance Test at Munster-Handorf with nearly a 12 point lead and an overall score of 136.12
Earned 9.5 on temperament and rideability and 9.o on character, constitution, and trot
Dominated Dressage portion of the testing with 20+ point lead over the next highest scoring stallion in that phase with 141.70
Stands at Hengststation Pape in Germany
In full training under Susan Pape
Fiorano at 2010 Oldenburg Stallion Days – Stallion Parade (Fiorano begins at minute 3:05)
Fiorano at 2011 Neuenkirchen.

Approved for Hannover in the VhW late 2007 approval
Leased by the Hanoverian State Stud, Landgestüt Celle for 2008 breeding season
In November of 2008, finished 3rd of 29 at the 70-day Stallion Performance Test at Adelheisdorf
Earned 9.0 for rideability and 8.0’s or higher for temperament, trot, and canter at Performance Test.
Now fully licensed, will continue to stand at Landgestüt Celle with his first foal crop expected in 2009
Will be ridden by Ole Kuehler, current rider of Don Frederico
Second Rousseau son approved in Hanover
Half -brother to 2008 World Champion 6-Year Old, Dramatic, by Don Frederico

Top Sale at 2008 Hanoverian Auction at 80,000 Euros, purhcased by Gestut Tannenhof
Approved by the Oldenburg Verband
Attending 70-day test in Adelheidsdorf in August 2009.