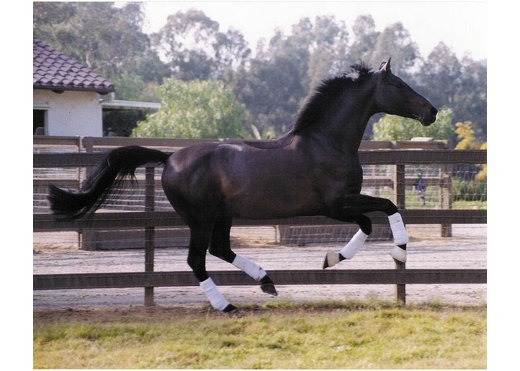 In 1999, Lordship was ranked #2 among young German stallions, between top ranked Corofino and 3rd ranked Riverman, as a producer of show jumpers with a phenomenal breeding index of 162. It is most interesting that the ranking, published by Pferd+Sport magazine, was calculated on a highly varied number of offspring: 74 from Corofino, 20 from Riverman, and just 10 from Lordship. It very clearly illustrates the performance potential of Lordship offspring.

Born in 1990, Lordship was a stallion of enormous personality and charisma, exhibiting exceptional gaits for dressage ands well as a quality jumping technique. Indeed, he excelled in both dressage and jumping, competing up to Prix St. Georges level in one discipline, and Grand Prix level level showjumping at the end of his show career.

At his stallion test in Medingen in 1993, Lordship received equally high scores in all sections, and placed 5th overall among the forty-four stallions in the testing. In 1995, he competed in the Bundeschampionat for 5 years old horses, and in 1997, while leased to a farm in Denmark, earned an invitation to the Danish National Championships in both dressage and jumping. Lordship was imported by October Hill in 1998 for competition in showjumping and participated in large circuit horse shows with rider Erin Davis before retiring for breeding in 2002.

Lordship’s stamm, or mare family, is 2495, the family which produced Corleone, Lord Calidos, Amaro D, and Las Vegas (Lord), as well as the international show jumpers Coppola Mercedes Benz and Lifestyle. His bonits were 8777678 for a total of 50. He passes on his size, color, type and movement with startling consistency and all offspring carry his gracious face and large eye as well as his wonderful demeanor and rideability.

Lordship competed successfully in both dressage and jumping.  He was retired to stud exclusively in 2002.

During his life, Lordship produced foals in Germany, Denmark and in the United States. His ability to compete equally well in both dressage and jumping has been passed on to his offspring and is evidenced in his many sons and daughters. He has had dozens of premium foals and mares, successful showjumping horses and numerous competitive eventing horses as well..

Above all, Lordship offspring are known for their exceptional movement, rideability, and their amateur-friendly demeanors.

Lucile, a daughter from a Corleone mare, was a reserve champion at the Schleswig-Holstein Mare Show in 1998, and has produced three approved stallions in Germany, New Lord (Newton), Casillas (Colman), and Loveless (Lord Z). Lordship is also the damsire of the UK-based stallion Sir Isaac (Newton).

Lightning Speed (aka Lord Lightning) placed 5th in the $25,000 Germantown Grand Prix and 7th in the $35,000 Oaks Blenheim Classic.

London Calling OHF led the 2014 NAYRC for Area VI after dressage and finished up 10th overall at this ver special and prestigious event.

Appletini OHF has had top 10 placings in 2015 with top rider and owner Kristi Nunnink at the preliminary and intermediate levels.  The mare is now bringing a junior rider up through the levels.

Landonn I OHF has top placings in CIC and CCI eventing at the preliminary and intermediate levels in 2014 and 2015 with top rider James Atkinson. He was a winner at Preliminary at CHP, and was a top 10 finisher at Preliminary or Intermediate at Galway Downs, Woodside, and Twin Rivers in 2015.

Lord Lombardi OHF has multiple wins at preliminary level in 2015 with rider Megan Traynham and is competing at international levels.

Lunar Eclipse FCF competed in the YJC qualifiers before bringing young riders up in the low jumper ring.

Lysander has numerous top 3 placings at HT 2-star with rider Doug Payne in 2015.

Rumpus Room OHF competed in hunters & jumpers with both adult and junior riders.

Tallulah OHF is competing in 2015 with rider Matthew Piccolo in open jumper and mini-prix classes.

Wasabi OHF is competing with a beginner rider in the low jumpers.