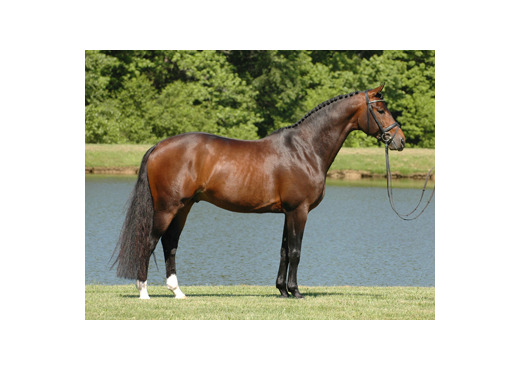 Harmony’s Wamberto claimed the spotlight in his career when he became the 2006 Champion of the KWPN Stallion Show. His bright expression, outstanding elasticity, and superb elevation brought the crowds to their feet in Den Bosch, applauding this young son of the internationally celebrated stallion Rousseau. Prior to this Championship announcement, Harmony Sporthorses secured Wamberto for breeders here in North America.

At the 2007 100-Day Stallion Performance Test at Paxton Farm, Wamberto surpassed his peers, winning the test with an impressive margin. His overall performance index was 158.78, where the second placed stallion earned 135.52. With a dressage index of 168.87 and a jumping index of 145.15, Wamberto strongly demonstrated his versatility and outstanding athletic ability. He earned perfect 10’s for his character and canter, and 8’s and 9’s for his walk, trot, and rideability.

Some bad luck with health prevented Wamberto from starting his competitive career until 2012. He had successful showings at Third Level and finished the year with a 4th place finish at a competitive USDF/ABIG Region One Second Level Championships.

Wamberto’s offspring have stood out amongst their peers at numerous breed shows across the country. His foals have earned premium awards at inspection, won numerous Championships at breed shows and have claimed titles in the USDF All breeds year end awards. Wunderboy MLW was the Yearling Colt 2010 Horse of the Year for USDF with an average score of 81.5%. With the strength of Wamberto’s gene pool and his own athleticism, Wamberto is an ideal stallion to positively influence the jumping capability, movement and improve the rideability of any sporthorse prospect. Wamberto’s first foal crops are now undersaddle and consistently demonstrating a cool mentality and workmanlike attitude. This wonderful temperament and easy trainability is a highlight along with their natural self-carriage and athleticism. Wamberto’s versatility is evident in his offspring as they are already demonstrating great potential for all sporthorse disciplines!

Photo Credits and Captions.   Wamberto at 100-day test at Paxton Farm, Ohio in the cross-country phase.

2006:
Champion of the KWPN Stallion Licensing, Den Bosch, The Netherlands

2012:
Several wins and top placings at Second and Third Level, scores in the high 60 and low 70′s
4th Place at 2012 USDF/ABIG Region One Championships at Second Level