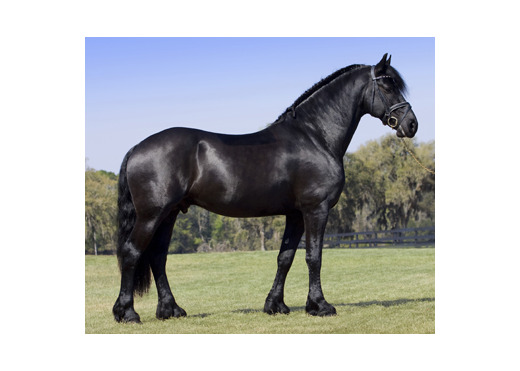 Approved on Offspring
Meinse is an exciting 1st Premium stallion that has shown his talent for dressage and as a sire. In 2012, he was Approved on offspring.

In 2009 and 2010 he competed successfully against all breeds and won two GAIG/USDF Regional Championships. He has earned numerous High Score awards and brought home many tri-color ribbons.

Throughout his stallion test, Meinse received good marks and is considered a versatile stallion. He has great qualities for both under saddle and harness work. Built uphill, with a beautiful shoulder and neck, Meinse is a nice rectangular model. With three quality gaits and fluid movements, Meinse excels as the modern type of Friesian.

Meinse is by Iron Spring Farm’s successful dressage stallion, Heinse 354 Sport, who has sired several Approved stallions and keuring champions.  Meinse's dam, Femke van New, is from the important stam line 150 and is a 1st Premium Star mare. With these great bloodlines, it’s no surprise that Meinse’s first foals caused a sensation.
What to Expect When You Breed to Meinse