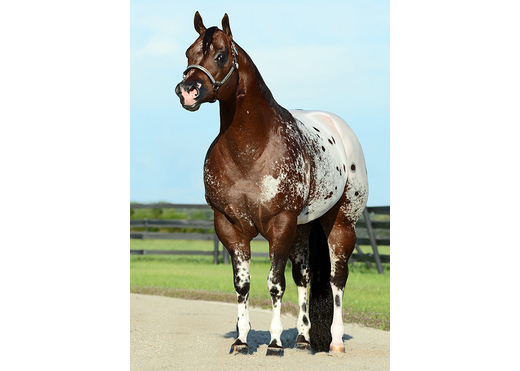 THE SECRET PARDON is a vividly colored, HYPP N/N, 2008 Appaloosa Stallion, and Sire, with a winning show record at the National level, including 5 National (US) & World Halter Championships & Reserves.  The Secret Pardon was also the prestigous National (US) Grand Champion Halter Stallion as a yearling. THE SECRET PARDON is a recipient of the 3 ApHC Bronze Medallions and is well proven as a sire of color & quality.

The FEE for the PURCHASE of Frozen Semen from The Secret Pardon is $2,000. USD for an amount we define as the amount equivalant to the number of straws which would be used if a mare required breeding on her second heat cycle.  Please refer to the information below for more details on pricing.

THE SECRET PARDON meets today's tough criteria for that of a modern Appaloosa halter stallion and sire with exceptional class, charisma & style, as evidenced by an outstanding show record at the National level, and an unparalleled halter pedigree of Appaloosa Halter Royalty-top and bottom.

The Secret Pardon is a modern Appaloosa stallion, with many positive attributes to offer as a sire of Appaloosa Halter contenders.

For overseas breeding via Frozen Semen, THE SECRET PARDON was tested, collected and frozen, by the experienced Team at Peterson & Smith Equine Reproductive Services, a featured SBS Facility & Affiliate.
The Secret Pardon has been moved to beautiful Western Kentucky is now being managed by Amy Gumz, of Gumz Farms, where semen will be frozen and shipped from.

The next step in proving THE SECRET PARDON's as a suitable sire for breeding via the use of his Frozen Semen was to purchase mares specifically for testing the frozen semen on, and breeding them with the frozen semen.

Peterson & Smith Equine Reproduction performed test breeds on the mares purchased for this purpose, using straws from the Control Groups for each lot sent to Australia with positive results, resulting in Live Foals, including the popular 2013 Appaloosa Snowcap Stallion, Pardon My Moonshine, AKA "Fenton." In 2015 another mare in Italy was reported to be in foal, via shipped, frozen semen and is due in May, 2016. Unfortunately due to human error the entire reserve of The Secret Pardon's frozen semen was shipped via truck to a single client, and although returned to the lab after well over a week, we could not gurantee it and deemed it to no longer be consistent with the protocols and standards of excellency, as set forth by PSER, the SBS, and at Sweetwater Farms.

Contact Amy Gumz/Stallion Manager for The Secret Pardon, at amy@gumfarms.com for frozen semen purchasing contracts. Or you may also contact Laurie Rylander, owner of THE SECRET PARDON at laurie@sweetwater-farms.com with questions you may have about what our contracts mean.

The SBS Knowledge Library, with its fantastic, wide range of topics, is a must read for information about using frozen semen, the importance of using it exactly as prescribed, and problems that can occure and what to do if things do not go as planned.

The SBS has provided this library of information to all sharing the common goal of producing live, healthy foals using frozen semen!

The FEE for the PURCHASE of Frozen Semen from The Secret Pardon is $2,000. for 2 DOSES, which we define as the amount equivalant to number of straws, which would be used when a mare requires breeding on her second heat cycle.

All other expenses incurred relative to the order for the frozen semen, including but not limited to transportation of the semen and veterinary expenses, are to be paid by the mare owner. Bookings for the purchase of Frozen Semen by qualified mare owners are currently being accepted with a nonrefundable deposit of $500. USD, which is deducted from the $2000. total for the purchase of the straw dose for 2 heat cycles.

All unused semen must be destroyed and a certificate stating the semen was destroyed, and not sold or used, must be sent to the stallion owner, with a copy sent to the SBS, signed by a certified veterinarian or breeding specialist with the date of the semen's destuction and the manner with which it was destoyed.

May the spots be with you!

The success of THE SECRET PARDON'S offspring in the show arena, combined with producing a high percent as a color are helping to prove this young stallion as a sire.