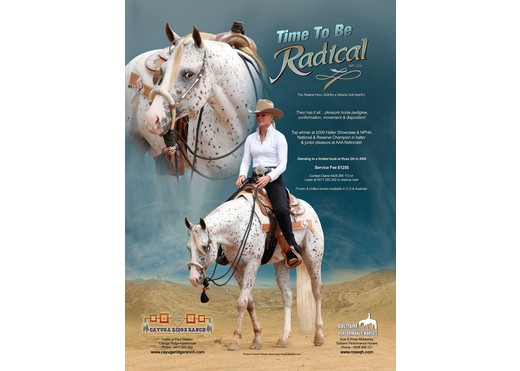 TIME TO BE RADICAL

Time To Be Radical (2005 stallion) was imported to Australia from the US in 2008. He is a National Champion in Junior Western Pleasure in Australia, and Reserve National Champion in Amateur Western Pleasure, shown by Kyle and Kristy Mobberley. He is also a National halter champion. He earned futurity sweepstakes championships in junior pleasure at the Appaloosa Championship show, Victorian State Show, and was Reserve Champion in the $10,000 challenge for junior pleasure horses at the Australian Halter Showcase and top 5 at NPHA in 2009 in open jr western pleasure (defeating over 40 AQHA competitors in these showcase events).  In the USA, shown by Ray Burchett, he earned ROMs in colour and halter, standing Grand Champion Stallion as a yearling in many regional shows and top 10 at the World show. Theo was also prepared and shown to top 10 futurity and western pleasure placements at the Appaloosa World Show in 2007 by Ty Hornick. His late sire, The Radical Hour AQHA produced both national and world champion AQHA and APHA western pleasure and huntseat horses and Congress finalists. Time To Be Radical's dam, Miracle Doll ApHC, is a producer of multiple futurity champions and performance point earners, and is sired by The Miracle Chip, the only horse to win both national and world championship western pleasure championships and the Solid Gold Futurity as a 2 year old. Theo's pedigree is full of hall of fame producers and he himself has produced many national, futurity and sweepstakes champions in western pleasure, longe line, halter and suitability for dressage as well as hunter under saddle events. His progeny have also been top 5 at NPHA $20,000 2 year old western breed challenge  and earned top placements in yearling versatility and were winners at NSW, QLD, WA and VIC State AAA Championships. Frozen semen is now available in Australia with SBS and in USA with Zoetis. See www.timetoberadical.com for more information or check out his FB page at Time To Be Radical for his latest winners! Producer of over 85 coloured progeny with champions in Australia, New Zealand, New Caledonia and USA!

Time To Be Radical is an ROM earner in most colourful and halter in the USA, and has top 10 placements in 2 year old western pleasure at the Appaloosa World Show Championship and Futurity in 2007. He has also earned numerous grand championships in halter and colour at ApHC regional shows, and earned top 10 honours in open halter at National and World Show in 2006 yearling stallions. After being imported to Australia in late 2008, he earned AAA national championships in junior western and amateur western pleasure in 2009 and 2010. He was reserve showcase pleasure champion in the 10,000 junior pleasure challenge at the Australian Halter Showcase, competing against top quarter horses and paints. He was also top 5 at the NSBA all-breed challenge in junior pleasure and a finalist in the pleasure challenge at NSBA in 2009. He is now the producer of offspring who are earners of national championships in performance events and halter, including western pleasure, huntseat, suitability for dressage, yearling longeline, trail and horsemanship. He has sired over 20 futurity and sweepstakes winners and high point in show youth horses. His oldest crops are now 6 years of age, and have won futurity, NPHA, high point and national championships in western pleasure, huntseat, trail, hunter in hand, halter, longe line and other disciplines. He also has sport horses successfully competing in dressage and eventing. At 15.3 hh, he is a good cross for thoroughbred and sport horse mares wanting good movement, strong hocks and quiet dispostions.

Time To Be Chipped. Yearling hunter in hand and halter futurity winner.

Caught Kissin the Boys. 2 and 3 year old halter and hunter in hand winner.

SOQ A Radical Moment. Grand champion and futurity winner in halter and hunter in hand.

Time To Be Stylish, 3 time National Championship in hunter in hand, suitablity for dressage and hunter hack. Now in foal to Potentially Lazy AQHA.

Time To Be Natural. 2019 stallion. Championships in halter, and top 3 at 2021 NPHA championship show in yearling led trail and hunter in hand. This boy pretty bay boy has a big blaze and is dark bay with white spots and roaning. Now riding, he'll be shown in 2022 and 2023 in Australia!

Time To Be Chipped

Time To Be Natural

As Time Goes By