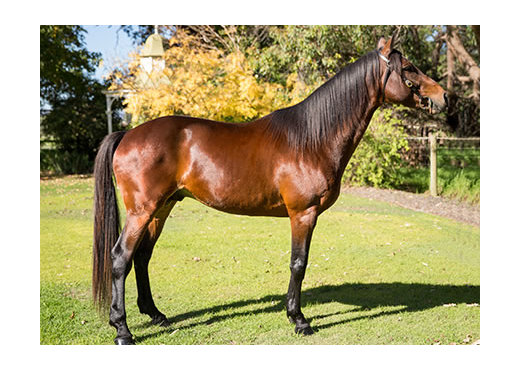 Out of Edenhope BETTY JANE by Nabinabah EASY GUN

Henry is a "proven breeder" of polocrosse horses with many progeny successfully competing at all levels in every state of Australia.

He is actually a very full 15.2 hands in height at the wither. He has been measured unshod. Is probably more accurately 15.2 ½ hands. He has a very good structure and is an excellently boned horse.

Henry is highly fertile with a high sperm count and high levels of sperm motility. While his frozen semen is untested, there are no reasons why joining mares to Henry using frozen semen will be anything but successful.

The principal attributes of Henry's foals are that they love the game and they have willingness and an instinct to play the game. They are also smooth, soft and pliable.

One thing that must be said, is that Henry's foals while strong and active, are not early maturer's. Generally they need to be 3 or 4 years old before being broken-in and a couple years of development and further growth before being played in competitive polo or polocrosse.

Henry shared principal stud duties at Edenhope for Daryl and Bernie Smith from 2004 – 2013. Henry has 13 registered progeny with the Australian Stock Horse Society, but many more which have not yet been registered.

The other principal stallion – Edenhope Bundy - was sold to South Africa in 2010 but effectively left Edenhope some time earlier and since that time, Henry has been the sole resident sire at Edenhope.

Edenhope has always had a strategic policy of using outside stallions with selected mares, with a view to developing new bloodlines and providing outcross opportunities including the selection of future sires. This has been a considered and well established policy and one that produced Edenhope Henry in 2001.

Balwyn has purchased a lot of horses from Daryl Smith over the last 30 years, since 1980. Most of these purchases were young playing horses, with more lately a number of brood mares. Dick did a deal with Daryl in 2007 at the Polocrosse World Cup at Warwick Queensland, to purchase 4 of Daryl’s old mares that had been breeding for him for some years. As part of this deal, the mares were too be sold to Balwyn in foal to Edenhope Henry.

Two of these mares have been a great success at Balwyn. These are Edenhope Elfin and Edenhope Pocahontas .

The other two mares have not been so successful. One mare didn’t complete the trip to WA and the other Edenhope Celica was really too old. We got a foal from her joining at Edenhope which happened to be to Edenhope Bundy, but we couldn’t get her back in foal and retired her.

But we are fully satisfied with the two excellent successes that we have achieved with Edenhope Elfin and Edenhope Pocahontas.

At the time that Dick Lester did the deal with Daryl Smith in May/June 2007, Edenhope Elfin had foaled a filly to Edenhope Henry and Daryl preferred to keep Elfin for 6-8 months and wean the foal and retain ownership of the filly. But Dick was insistent and Dick and Daryl agreed a further deal, where-by Balwyn would purchase the filly. This filly is Edenhope Elegance.

This result was prophetic as within a month or so of Edenhope Elfin and Elegance arriving in WA Equine Influenza broke out in Eastern Australia and all horse movement throughout the country and particularly in the northern part of NSW were suspended indefinitely. This turned out to be 3 or 4 months.

The 3 progeny of Edenhope Henry currently in WA are;

This filly is making her mark in Junior Polocrosse in WA. Elegance has been loaned to Jake Wilding on a long-term basis and is expected that he and she will be selected into the WA Junior Polocrosse Team to contest the National Championships in Darwin NT in July 2014.
Edenhope Elegance is a real “head turner”.

Several well established polocrosse players and horse breeders in WA were keen to use Edenhope bloodlines in their breeding programs and they encouraged the Lester family to leave Escalator as a colt for about four joining’s. He was then gelded and broken in as a polocrosse horse. He was later sold to Stephen Beech and his family of 3 girls, all of whom along with Stephen are enthusiastic and competent polocrosse players.

We are looking forward to this forth - coming season for further progress and achievement on the Polocrosse field Balwyn Escalator.

We purchased Edenhope Pocahontas in 2007 but she didn’t get into foal until later in the season. She was therefore caught up in the EI travel embargo and didn’t arrive in WA until well into 2008 when the travel embargo was lifted and the free travel of horses throughout Australia resumed.

Balwyn Tepee is a dun. She was a big foal and always active with a beautiful floating gait. She has always been an attractive mover, even as a foal.

She is a favourite with James Lester as a polo horse. She won “Best First Year Horse” at the Charles Cup Polo Tournament in WA in April 2013.

We think that she will continue to impress as a polo horse and possibly be an even better polocrosse pony.