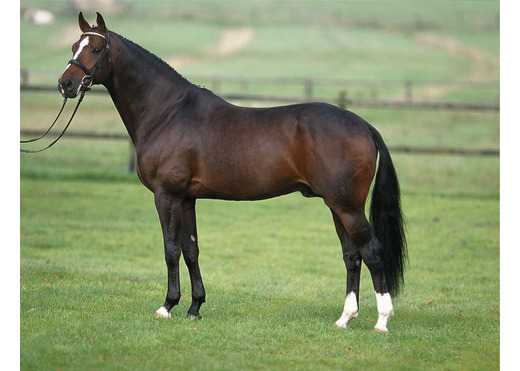 It is such a pleasure to have Baroncelli as part of our daily lives! We have had the privilege of knowing him throughout his life and personally cheer him on at many of his big victories. We were always impressed by his solid character, cashmere gaits, and glowing charm. We have so enjoyed the opportunity to now campaign Baroncelli at Grand Prix and to offer him to North American breeders. He is such an honest stallion and tries hard to please at all times. Professionals and amateurs alike find much to love in Baroncelli and his offspring!

Baroncelli has never failed to shine. He was Champion of his stallion licensing in Verden in the year 2000 and the Champion of his stallion performance test in Muenster-Handorf with a dressage index of 135.9 and well-above average scores for his jumping. In 2002, the Hanoverian Verband awarded Baroncelli the significant title “Best Hanoverian Stallion of the Year” which to date had never been awarded to a privately owned stallion. He was the Reserve Champion of the Bundeschampionat (German National Championships) in 2002, having won with first qualification with a 9.1.

As a 5- and 6-year old, Baroncelli won his qualifying round at the FEI World Breeding Championships for Young Horses in Verden and finished 4th place overall. He had several wins and top placings in Wiesbaden, Verden and Alfalterbach as he developed toward Germany’s ‘developing horse championships’ (the Nuernberger Berg Pokal for 7-9 year olds). At the finals in Frankfurt in 2007, Baroncelli celebrated a 4th place finish. Baroncelli made his earliest Grand Prix in 2008 and has matured to produce scores reliably 66-68% with his best scores topping 70% at Grand Prix.

Baroncelli’s offspring have demonstrated outstanding qualities as riding horses. Many excellent riding horses by Baroncelli have been sold through the Verden Elite auction. His Hanoverian licensed son Black Tie (ds. Raphael-Gardestern) earned 8’s for character and jumping ability at his stallion performance test at Adelheisdorf. He was imported to the US and is a recognized producer of hunter offspring. His son Bradley Beach was one of the top FEI Junior horses in Hungry and participated in the 2012 European Jr/Young Rider Championships. Baroncelli’s kind and generous nature underlies his keen ability to perform and is clearly evident in his offspring.

2002
Named “Best Stallion of the Year” by Hannoverian Verband, a first for a privately owned stallion

2006 – 2007
First Place awards at German shows such as Wiesbaden, Verden and Affalterbach

2007
Qualified for Nuremberg Burgpokal, achieving 4th place at the Finale in Frankfurt

2010, Bahai was awarded the Engler-Friedlaender Memorial Trophy from the AHS for earning the highest Mare Performance Test Score in the nation.

Licensed in 2005 by the Hanoverian Verband in Germany, performance tested in Adelheidsdorf
Successes in the Hunter Jumper arena with many victories at Ocala, FL and Lexington, VA His success awarded him the AHS Hunter of the year award!

Bred and owned by Sandy Hunt