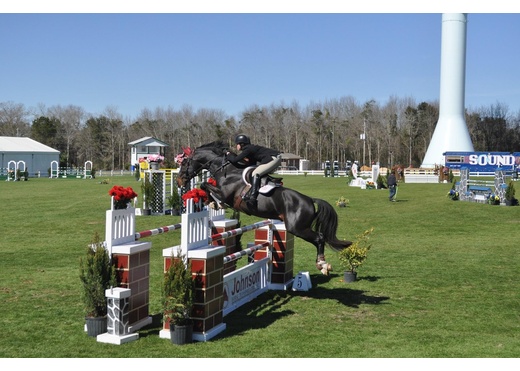 Casanova CF is a 2007 Dutch warmblood stallion by Contango. Casanova's dam, Naomi, is by the famous Argus. As a youngster Casanova's movement earned him numerous awards. He is currently showcasing his talents in the jumper ring in the YJC 7 yos.
Performance and multiple mare discounts available!
Casanova CF is currently being shown by Callie Schott with River Mountain Farm. Together the pair are successfully competing in the Young Jumper Championship 6 year old classes. Casanova has amazing power, scope and movement. He continues to impress onlookers with his powerful jump, elastic movement and wonderful attitude. Casanova is a modern type stallion with great conformation. His offspring have his movement, attitude and natural jumping ability.

Casanova CF is by the famous Contango. Contango had a successful career as a show jumper in the Netherlands before switching to dressage. As a dressage horse, he won 33 Grand Prix classes, including six championships. At the time of his passing, he was the only Preferent stallion in North America.

Casanova's dam, Naomi, was by Argus. Argus was the only horse in the world that was simultaneously successful in both Grand Prix jumping and international dressage competitions. As of 2003, Argus has produced the second highest number of 1st premium offspring in North America of all approved stallions. In those, he has produced 22 star, 2 keur, and a number of approved sons.