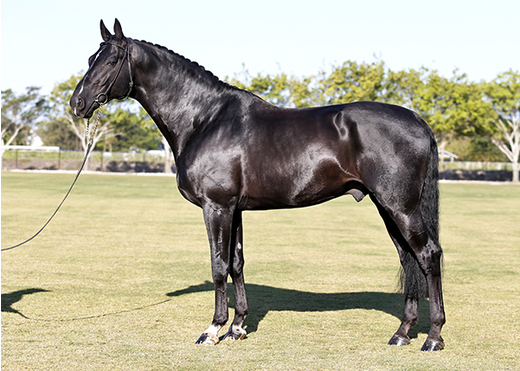 In 2014, Uno Don Diego won four Prix St. Georges and Intermediaire I classes with scores as high as 73% at the Adequan Global Dressage Festival. He has three quality gaits and an excellent temperament and work ethic.

Uno, as he’s known at the barn, was bred by the legendary Stutteri Uno in Denmark. He was licensed as a premium stallion in 2006 by the Danish Warmblood Society. In 2009, he represented Denmark in the Six-Year-Old Final at the World Young Horse Championships in Verden. Before leaving for the States he competed at advanced level in dressage in Denmark.

Uno Don Diego’s sire is Dressage Royal, whose bloodlines include the prolific Donnerhall x Rubinstein I cross. However, it is Diego’s dam that became a legend in her own time, producing two licensed sons, Diego and Uno Don Diablo, as well as the remarkable Uno Donna Unique, World Young Horse Champion.

He passed his 35-day performance test with a total dressage score of 866 and jumping total of 709. At his final grading in 2007 he was awarded a breeder's silver medal and the Challenge Cup of Aage Ravn for being the best 4-year-old Danish-bred dressage breedsire.

Remarks: A stallion with good manners in the stable, also with other stallions. He is energetic with very good and uncomplicated temperament and a good character. Very willing to work and attention. The movement is smooth and rhythmic, especially with good balance in the canter. Jumps willingly with good attitude. The stallion has developed positively during the test. Dressage very good. Jumping good.

Uno Don Diego sired a total of 29 foals in 2007 and 2008 respectively. His foal report states that they were a uniform group of foals, large framed and muscular, good to very good type.  A son from Uno's first foal crop is the gold medal breedsire and dressage performance test winner, ERA Dancing Hit. He has two daughters awarded with the bronze medal at the Elite Mare Show; UNO Danuska and Donna Divina Holst.