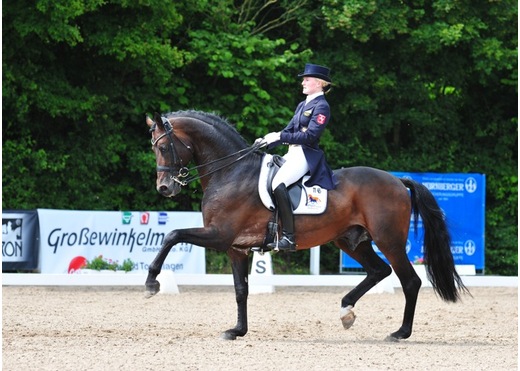 Rock Forever is known for his exceptional three expressive gaits. His impeccable conformation lends well to his marvelously free shoulders. Rock Forever has a powerful, uphill canter that is distinctly his and it is continuously passed on to his offspring, known as the “ Rock Forever Canter”.

At the young age of 12 this incredible stallion already has offspring that are carrying on his legacy. He has 24 licensed sons and several state premium mares. In 2013 Rockencio (Rock Forever x Florencion I) was named the Champion of the Westphalian Stallion Licensing. Rock Forever’s offspring represented him at the 2013 World Young Horse Championships and the 2013 Bundeschampionate. Rock Forever himself had a great year in 2013 when he had the second highest German Breeding Index, a great achievement for such a young stallion.

With such a diverse heritage, successful competition record and flourishing offspring Rock Forever is a sire that is making a mark for himself now and for the future.