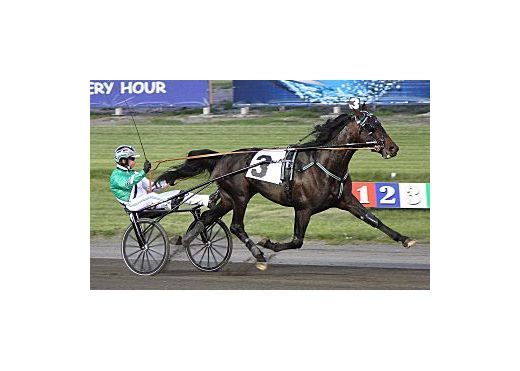 Winner of the 2014 Hambletonian, in addition to The Goodtimes, Simcoe, Reynolds, NJSS Final, Trixton trotted to his record defeating Nuncio in the Hambletonian despite being parked the entire mile.  Trixton offers what many consider to be the Apex pedigree in the harness world today.

Trixton is by Muscle Hill, considered the greatest trotting colt of the generation and in turn a son of the Hambletonian sire, Muscles Yankee, responsible for consecutive Hambletonian winners Deweycheatumnhowe (2008), Muscle Hill (2009), and Muscle Massive (2010).  Muscles Yankee in turn is the foremost son of the foundation sire, Valley Victory.  Trixton is link number four in the leading stallion line of this era.

Trixton’s dam, Emilie Cas El 2,1:59.2f; 3,1:57.1f ($245,199) was 2-year old filly champion of her year and is a FULL SISTER to three extraordinary trotting sires in Andover Hall, Conway Hall, and Angus Hall.  Each of these has already left an outstanding siring son in Donato Hanover for Andover Hall, Windsong’s Legacy for Conway Hall, and Majestic Son for Angus Hall.  The next dam is Amour Angus, arguably the greatest trotting broodmare of this generation.

Trixton's oldest foals are yearlings in 2017.