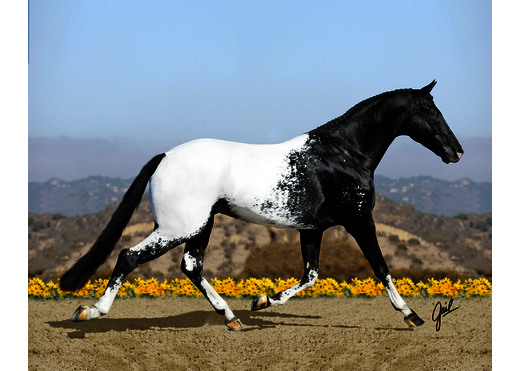 This stunning black and white stallion was the 2007 Reserve National Champion HIH 2 & 3 year old colts. Thank you, Christy King, for a great job showing him! After his show career "Wrangler" came home to Central California and went to work in the breeding shed, siring 11 foal crops totaling 34 foals. Two of Wranglers foals went on to become a Reserve National Champion HIH (PromiseMeaWrangler) and a Reserve World Champion HIH (Fearless) yearlings. Several of his foals are now old enough to be shown and are out there winning in performance! Wrangler's color percentage is 100% on both appaloosa and solid mares! His foals are sweet, smart, sensible and stunning, just like their sire!!!!