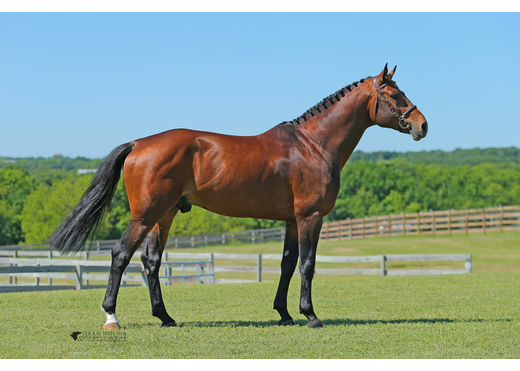 With his first showing efforts in 2014, the 4 year old Carrido emerged as a superstar.  With impeccable style, a serene demeanor, and a fantastic canter, his handsome type and presence only lent more to his blossoming character, posting 9’s in character, rideability, technique and jumping capacity.  In his 5 year-old season, Carrido continued to develop beautifully in the younster clases, with scores up to 8.5 in jumping technique and all 9’s in gallop, sport potential, and rideability.  He competed at the Zangersheide Young Horse Championships in Lanaken where he claimed a victory in the second qualifying round.

Arriving in the United States to begin his 6 year old season, Carrido quickly qualified for the YJC Championships and was the winner of the 6 Year Old YJC Western Regional Championship final in Del Mar in September of 2016, finishing the three round competition with no faults at all.  Now he is starting regional Grand Prix level competition and show great promise.

Carrido is approved for breeding with the Oldenburg Horse Breeders Society (OS) and the Westfalen North America for 2016.  Frozen Semen only.