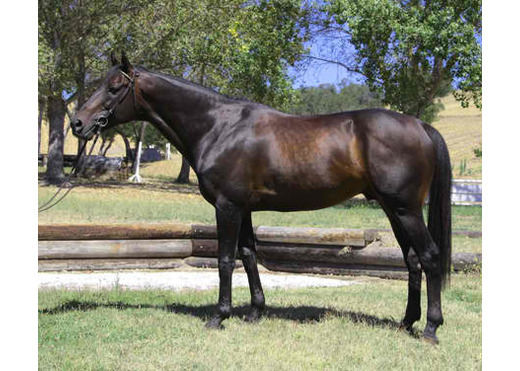 Lifetime breeding license with the ATA with scores of 8s and 9s out of 10, AHS, HGV,AQHA, and the ISR/Oldenburg NA.

Scores with Hanoverian society are thought to be the highest ever given to a Thoroughbred Stallion in decades or longer.

Charismatic, intelligent, kind with an amazing work ethic. This stallion is focused and professional about his competitions or breeding. He knows the difference. He is a delight to work around.

Sea Lion competed successfully in twenty-one international eventing competitions, including fifteen at the 3*(now 4*)level, and competed at the Rolex 4*(now 5*) event., Sea Lion was USEA Regional Advanced Champion and USEF/ PHR National Advanced Champion. In 2014 Sea Lion retired sound from eventing to begin his breeding career - while continuing to demonstrate his versatility competing in jumpers and hunters BAREFOOT!

Racing: 12 starts in NY won at Belmont and was in the money 7 times.

Sea Lion's colt, Sunsprite Sargasso Sea, Has been purchased by a United States Equestrian Team rider. He is just 6 this year.

All Sea Lion foals to date that have shown FEH have qualified for National Championships.

More than half of the breeders that have bred to Sea Lion have bred their mare or multiple mares back to him.

Sea Lion has foals in Germany, Spain, Austrailia, Canada and all over USA