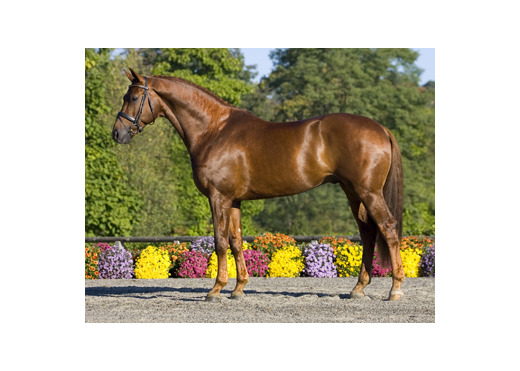 Before being imported in 2005, UB40 was one of the most popular young stallions in Holland . In 2004, he placed third in the Champions' Ring at the KWPN stallion licensing. His first foals received excellent scores and remarks from the judges.

In 2006, UB40 was the Winner of the DG Bar Cup at his keuring with a score of 81.5%. In 2007 he was #1 KWPN-NA FEI 6 year old. Son Cinco de Mayo ISF was named winner of Weanling Colts at Dressage at Devon and Centerline HF was named USDF Horse of the Year, Dressage Sport Horse Breeding for Colts and Geldings. In 2009 he sired twelve 1st Premium and 3 Top 5 foals.  Learn more about UB40 offspring.

Test Remarks'..a modern, long-lined, riding type stallion with much front and much charisma. The stallion has a beautiful head with a large expressive eye. The neck is long, has a good position, and is well muscled.'

UB40 has one KWPN Approved son, Apache [ex Amigo], who was Res. Champion at the stallion show in the Netherlands in 2008.  He has also sired 18 Star mares, 2 Keur mares and 4 Elite mares.