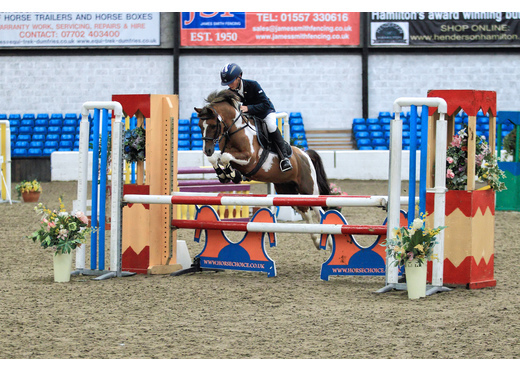 It’s rare that we add a pony into our line-up, but the beautiful type that Harlequin gives his foals caught our attention. At just 12.2 hands, Woodbury’s Harlequin is an adorable option for sport pony breeders that are looking to emphasize jumping ability.  His pedigree includes a high percentage of Welsh and Arabian blood, strongly consolidating his type and expression.  Grandsire Neron stood in Holland and was approved with the NRPS.  Neron was a very trainable and versatile talent, training both in dressage and jumping. Harlequin’s dam is herself a graded sports mare who has earned a Ster predicate.  She was successful in both dressage, showjumping, and working hunter pony. Her sire, Moelview Mohawk, was highly successful showing in-hand and has produced both in-hand and undersaddle winners.

Harlequin was lightly shown in 2009 and 2010 with resounding success. He won 11 Champion or Reserve Champion placings in-hand and finished second at PoniesUK. Now being shown by a very young junior rider, Woodbury’s Harlequin shows a strong desire to please and is both bold and careful over fences.

The Harlequin foals, out of pony and horse mares, are athletic and typey and display their sire’s kind, intelligent character.  This beautiful type and athleticism earned Harlequin a 4th place ranking on the British Breeding Futurity Sire Rankings for Sports Ponies in 2018 with a median score of 9.025. That same year, Harlequin was awarded the title of Futurity Elite Premium. His first North American born foal received an overall score of 8.2 at his ISR/Oldenburg inspection. In the 2018 Dressage at Devon Pony Division, Harley’s Angel finished Reserve Champion Pony Foal and full-sibling Harley’s Davidson was named Reserve Champion Pony Colt. With excellent quality frozen semen, we look forward to offering this pony stallion on a limited basis to US breeders.