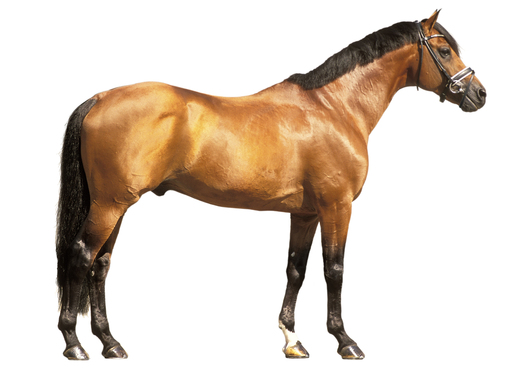 Lingh’s illustrious dressage career began in the Netherlands under Edward Gal. Edward trained Lingh from the time he was a green four-year old all the way up through their indisputable success in international Grand Prix’s. Lingh and Edward had many memorable medal finishes including Los Vegas, Amsterdam, and Aachen to name but a few.

In 2004, Edward and Lingh won the Dutch National Grand Prix Championships. The pair later helped win the team Silver Medal at the 2005 European Championships. Their best performance, however, was at the 2005 Las Vegas World Cup Finals where they finished first, beating teacher, mentor, and then-undefeated Anky Van Grunsven on Salinero. It was at this event that American rider and sponsor of the 2005 World Cup Final, Karin Reid Offield, first saw and fell in love with Lingh. Edward Gal and Lingh’s last performance was a Silver Medal victory at the 2006 World Equestrian Games in Aachen.   Later that year Karin Offield purchased Lingh, just after the KWPN licensed Lingh based upon his sport record.

The KWPN breeding committee described Lingh as “an honest and reliable stallion that is easy to work with. The great achievements of this stallion match his stunning conformation. Lingh is an athletic modern riding type. His head is intelligent. The neck has good length and form. The shoulder is long and well angled. The withers are well developed. The croup is a good length and well muscled. His legs are straight and correct.” Since then, Lingh has been approved for breeding by the Hanoverian, Oldenburg, Swedish, and Finnish studbooks as well as their American counterparts in addition to several Canadian Warmblood registries.

Early in their career together Karin and Lingh enjoyed competitive success with several top placings in Florida and at major CDI’s on the East Coast. With the aim to participate in the 2008 Olympic trials, the pair moved to the Netherlands and had a successful international tour. Upon returning to Florida for the winter season and trials, Lingh sustained an unfortunate injury in the stable that led to his retirement from sport and ultimately to his transition to life at top breeding stations in Sweden and Germany.

In the fall of 2008, Lingh moved to Flyinge, The National Stud of Sweden. He received terrific rehabilitative care and returned to a very comfortable level of soundness. Happily, Lingh was once again re-united with Edward Gal at the Flyinge Stallion Show on March of 2009. The pair performed before the Flyinge crowds where breeders and admirers from Scandinavia could once again appreciate Lingh’s expressive qualities as a Grand Prix stallion, especially in his one-time tempi changes, piaffe, and passage. In the spring of 2010, Lingh and Bo Jena, Flyinge’s long lining expert, performed at the Flyinge Stallion Show and gave an unforgettable performance demonstrating nearly all the Grand Prix movements in long lines.

Lingh bred for two seasons in Sweden and in January 2011, Lingh relocated to Germany to Gestut Birkhof where Lingh has now found his perfect retirement. Through Gestut Birkhof, Lingh readily services the German mare base and extends his influence to mares in neighboring countries like France, the Netherlands, and Belgium.

With a breeding career that didn’t start until 2005, Lingh didn’t waste any time in proving he can produce Champions. Lingh’s son Beau (Lingh – Ferro) was the 2009 KWPN Stallion Show Reserve Champion Dressage Stallion and the highest priced dressage stallion of the KWPN Select Sale, selling for 190,000 Euros. Beau  participated in Sweden’s National Championships for 6 year olds in 2012 and was a finalist. Lingh’s offspring in the United States have won at Dressage At Devon’s prestigious breed show. His offspring worldwide will soon launch their careers under saddle. With the easy mentality these youngsters have demonstrated, we anticipate excellent rideability and an ease to move up through the levels in sport.