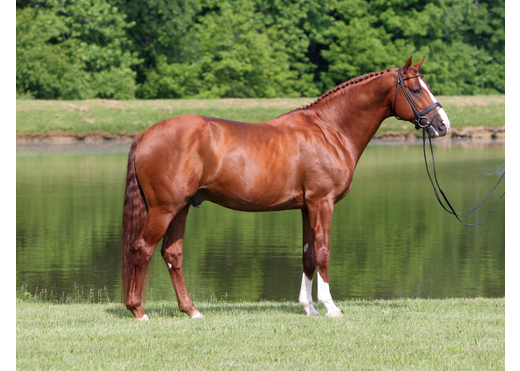 Rosall brings talent for collection through the "R" line as well as power and expression from Akzent II. Rosall has presence and demonstrated World Class  FEI potential in his collection work. He has a naturally gifted canter with power and expression and is schooled advanced work at a young age. His trot shows freedom in the extensions. Rosall is easy and fun to train. After a finding of an airway problem which stressed him at FEI Dressage, he  is now training in the Hunter discipline and doing well, with several  Blue ribbon places and high placings at 3'0" and 3'3". His foals are spectacular, with  Rosalie KIS (2010) placing 4th in her Debut at Dressage at Devon materiale class in 2015. His approved son , young stallion Royal English KIS in his Dressage debut with Katie Hiller, showing his kind temperament and Rusty is now eventing with his young rider. They get such wonderful temperament and also talent in several areas from their sire.

Kent Island Sporthorses has long supported their trainer, JJ Tate, and wished to try to help her reach her Olympic goals. JJ set out to find the ideal stallion with the right combination of talent, temperament, character, and pedigree that Marty and Wendy Costello would own and manage, but JJ would compete. JJ heard about the Oldenburg stallion, Rosall, through Oded Shimoni. Rosall was actually was being ridden by a friend of JJ’s at Katrin Burger’s, rider of French Kiss and Daydream. After viewing his videotape, JJ fell in love with Rosall’s canter. She made the trip to meet Rosall (barn name “Riley”) in the Fall. He was purchased and the Costello’s opted to leave Rosall in Germany until the completion of the 30 Day Stallion Performance Test.

Once Rosall finished his 30 Day Stallion Performance Test in Munich-Reim, he would come to the U.S. In the Spring of 2007, after becoming the Champion stallion at his testing, Rosall arrived in Maryland! Since then, Rosall and JJ have been strong on the competition circuits, winning many of their classes from Training to Third Level and earning the 2008 USEF All Breed First Place Award for the GOV at Training Level.

In early 2009, Rosall was the Champion Stallion of the first-ever 10 Day Advanced Stallion Performance Test organized by ISR/Oldenburg, NA. Held in Jupiter, FL at the Lady Jean Ranch, Rosall earned an overall 129 points and a lifetime license with the registry. He received 9’s on character, rideability, willingness to work and from his test rider, Mikaela Gunderson! (video)

Dressage at Devon: Second and Third Places for Materiale and Suitability Classes for Stallions/Geldings

Morven Park VADA/NOVA, Spring Licensed Dressage Show, April 11-12. Young Horse 6 Year Old Test Saturday, Four scores of 8.0, and one 8.5 for top scoring young horse , of the entire day, all ages; and Sunday, an 8.2 plus several mid to high 7’s, to tie for second place of all young horses and remain the highest scoring 6 year old.

Rosall’s first foal arrived in 2009.  Royall KIS, out of a Rolls Royce mare, earned Premium status at his GOV inspection.  Royall KIS is a very correct colt with a sweet temperament.  At Dressage at Devon, he earned an 8 for conformation and a 7.8 on movement and overall impression. In his early foal crops, Rosall is producing beautiful Premium foals with his front end freedom, strong hock action, good character and friendly demeanor.  Rosallie KIS ,  pinned at Devon 3 years in a row, At 1.2 and 3.  first place, a second and a 4th first time under saddle . .!! Today, 2020 she is earning over 70% for her amateur owner in the MIdwest.  Rosall has an approved son Royal Enlgish KIS and his filly Royal Roulette in 2014 wowed the GOV , premium filly. Rigadoon in 2018, is at PSG, continuing on. ( out of Hohenstein mare) .