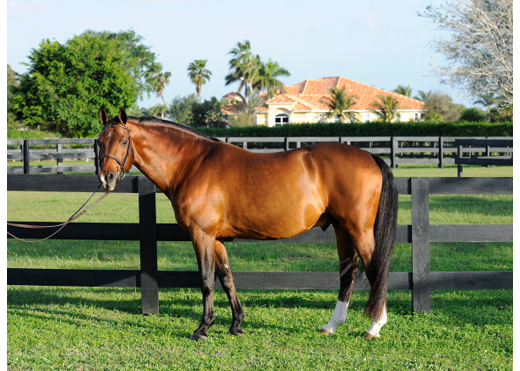 Harmony Bay “Whiskie” is 15.3 ¾”, 1991 imported Swedish Warmblood, out of the stallion Electro and the mare Walente.

Whiskie is a “once in a lifetime” horse. True to his Voltaire lineage, the sire of Electro, he jumped his way into the heart of his owner, Carol Cone, from their very first horse show in 2004 at the Winter Equestrian Festival. From there he captured every coveted Adult Amateur Hunter championships a rider could imagine.

Whiskie came into my life in the winter of 2004, fresh out of the working hunter division. I bought him at noon and showed him at 3pm. I will never forget that day, as he jumped like he was still in the 4’ division! Two shows later he recalibrated for the 3’ (my days of the a/o hunters was over as I had a full time job so the 3’ was just right) where he won what would be the first of countless championships, during the highly competitive Winter Equestrian Festival.

His expressive jumping style was exciting, having gained scores in the 90’s the previous Fall at the Capital Challenge Horse Show in the WCHR Challenge Class with rider Nora Fredrickson. Even as a 3’ AA Hunter, his retained his amazing scope. He delighted judges from Lake Placid to Florida, capturing championships and when offered, grand championships, at all the major competitions he entered.

He was a joy to show, having the best “work ethic” of any horse I ever owned or knew. Easy to prepare for the ring, he was totally consistent as he performed, outdoors, indoors, in good weather and bad. He was a master at his job and truly loved it. He was also so beloved beyond me and my team, that he even had a fan club, earning rousing cheers at the end of every round.

While striking in looks, his also has a delightful temperment . He is a gentleman to work around, from his groom, to vet, to farrier. He is so even tempered, that trail riding was a wonderful diversion to the show ring. It still is today. And when in the breeding shed, he continues to be extremely well mannered.

While early in his breeding career, Harmony Bay has been chosen for breeding by the most discerning professionals including: Havens Schott , Nora and MorganThomas, Tim and Kelly Goguen, and Ernie Oare. Renowned champion hunter mares who have bred to him include: Estrella and In Return.

Starlit Bay - out of Estrella, owned by Betty Oare

Arnold - out of In Return, owned by Havens Schatt

Willow Bay - out of willow, owned by Cathy McEnroe