All the Queen's Horses 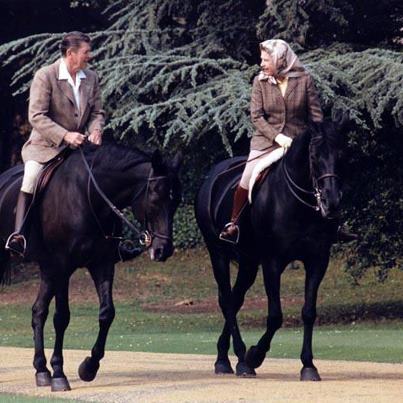 Her Majesty Queen Elizabeth II celebrated 60 years on the throne earlier this month. As part of the many celebrations a spectacular Diamond Jubilee Pageant was presented May 10-13th at Windsor Castle. Over 550 horses and more than 1000 dancers, musicians, and performers from around the world came together to pay tribute to the Queen, who attended a special performance on May 13th. The theme of the pageant was a journey around the world, reflecting The Queen's State and Commonwealth visits during the course of Her Reign. Horses were key performers in the celebration and many of the Queen’s own horses joined the parade. Follow these links for photos and video of the Diamond Jubilee Pageant. Here is some additional information about the Queen’s favorite past-time and the strong connection she has to the horse.

The Queen has always been an avid equestrian and horses play a key role in the sporting pursuits of The Royal Family, from polo to eventing, carriage driving and showing. At the age of 4yrs, Elizabeth and her sister Margaret received a Shetland pony named Peggy from their father, King George VI. Her majesty still rides today, at the respectable age of 86. Her daughter, Princess Anne is a former Olympic Equestrian and her Granddaughter Zara Phillips, looks set to follow in her mother’s footsteps having secured a place on the British Eventing team for the 2012 Olympics in London. In addition to riding for pleasure, the Queen is very interested in breeding and bloodlines, actively directing the breeding of not just her Thoroughbreds but also Shetland ponies at Balmoral in Scotland and Fell ponies at Hampton Court. Plus horses play an important role in many royal engagements and ceremonial events.

Racing
Appropriately known as “the Sport of Kings”, racing has long been popular amongst members of the Royal Family. In fact, Queen Victoria is said to have become so excited whilst watching a race at Ascot that she broke the window of the Royal box in a rush to see the finish! There is evidence that Henry VIII, Elizabeth I, and Charles I all raced their own horses. Her Majesty is regularly seen at race meets in both her private capacity as racehorse owner and breeder and in an official capacity at events which enjoy a Royal patronage, such as the Derby and Royal Ascot, which she attends every year.

Founded at Hampton Court in the sixteenth century, the Royal Stud has played an important role in the progress and promotion of breeding and racing horses. The Royal Paddocks at Hampton Court are still in use today and, together with the studs at Sandringham and Wolferton in Norfolk and Polhampton in Berkshire, constitute one of the leading Thoroughbred establishments in Great Britain. One of the first Derby winners to come out of the stud was Moses, who won in 1822. Horses bred at the Royal Studs over the last 200 years have won virtually every major race in Britain.

The Queen has ensured the ongoing success of the Royal Stud by being closely involved with the acquisition of new horses. She also began the practice of sending her broodmares to America to be covered and acquired the Polhampton Stud in Hampshire where yearlings are kept before they are sent into training. The Queen has about twenty-five Thoroughbred horses in training each season. American horse trainer Monty Roberts visits the UK at least 5 times a year to consult with The Queen about her training operations and to work with her young horses. 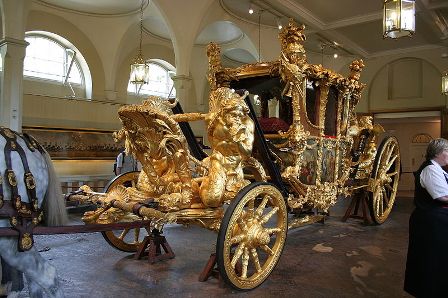 The Royal Mews
The Royal Mews has existed at Buckingham Palace since 1761 and provides transport for The Queen and members of the Royal Family by both horse-drawn carriage and motor car. The terms ‘Mews’ comes from the French muer and Latin mutare, meaning ‘to change’. This term was applied to the molting of a hawk or falcon, and then to the caging of the bird. “The King’s Mews” at Charing Cross was originally used to house the king’s falcons. By the 16th century, it was being used to stable horses.

Today, the Royal Mews is still a busy working yard which houses 30 carriage horses and over 30 members of staff including liveried helpers, coachmen and logistical staff. Ten of the horses at the Royal Mews are Windsor Greys. They take their name from the days when they were kept at Windsor in Victorian times and drew private carriages for the Royal Family. They continue to draw carriages carrying members of the Royal Family today, and in the event of a Coronation, they would draw the Gold State Coach. There are also approximately twenty Bays at the Mews. The majority of these are Cleveland Bays and the rest are cross-breeds with other draft horses.

The Royal Mews also houses the royal collection of historic carriages and coaches, visitors to the Royal Mews can see these carriages and some of the fine livery worn by The Queen’s coachmen. The most magnificent coach housed in the Royal Mews is the Gold State Coach, built for George III in 1762 it has been used at every coronation since that of George IV in 1821. 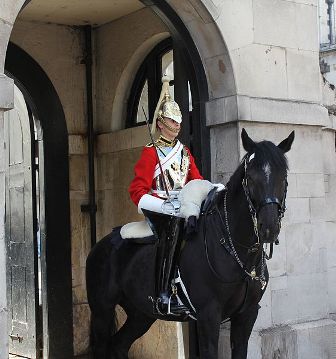 Horse Guards
The Queen's Life Guard is provided by men of the Household Cavalry Mounted Regiment (HCMR) at Horse Guards. Horse Guards is the official entrance to St James's and Buckingham Palace and troops have been on mounted guard here since the Restoration of King Charles II in 1660. In early times the Guard was as much as 100 strong and also provided Escorts to accompany the Sovereign if he or she traveled by road. Apart from members of the Royal Family or cavalrymen on duty, everyone needs the Sovereign's permission in the form of an Ivory Pass to either drive or ride through Horse Guards. The Guard Changing Ceremony at Horse Guards is a popular tourist attraction in London.

Burmese
The official birthday of the Sovereign is marked each year by a military parade and march-past, known as Trooping the Color. It takes place each June on Horse Guards Parade. The Queen's Color of a battalion of Foot Guards is 'trooped' (carried along the ranks) each year before the Sovereign. Only one color can be trooped at a time, and the five Household Regiments - Grenadier, Coldstream, Scots, Irish and Welsh Guards take their turn each year.

One of the Queen’s favorite horses was Burmese, a black mare presented to Her Majesty by the Royal Canadian Mounted Police (RCMP) in 1969. The horse was seven years old at the time but had already garnered much experience and praise as the lead horse for the RCMP Musical Ride. The Queen rode her in the Trooping the Color Parade six weeks later and every year after that until she was retired after the 1986 ceremony. Following her retirement, The Queen decided that she did not wish to have a new horse trained in her place and Her Majesty has attended the parade in a horse-drawn carriage ever since. Burmese spent the rest of her life in a pasture at Windsor Castle until she died in 1990.

For more of The Queen’s favorite horses, click here. 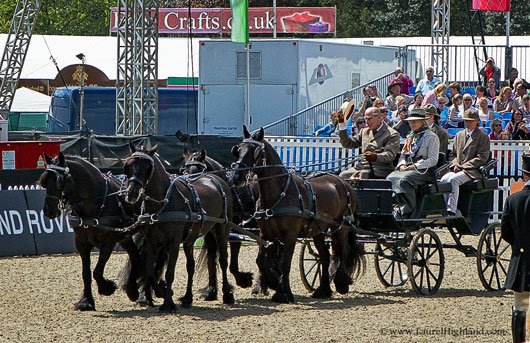