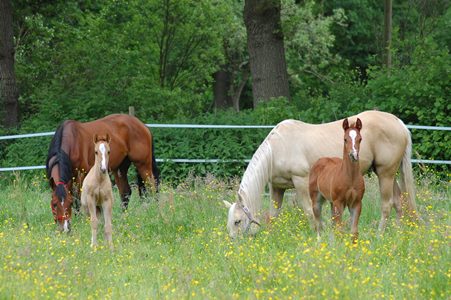 In 1999, Almut Cooper of Germany, took a vacation to the United States. It was while visiting a working ranch in Montana that she became hooked on the Quarter Horse and Paint Horse breeds. After returning home, she became the proud owner of a paint horse before the end of the year. Her venture in breeding horses began with the dream of purchasing an offspring of the NRHA Hall of Fame stallion, Hollywood Dun It. However, the reality was that such an offspring wasn’t in her budget. She put Plan B into action by searching for a good Quarter Horse mare she could purchase and breed to Hollywood Dun It using frozen semen.

After searching high and low she found the mare which would begin her career in breeding horses. Her first foal was born in 2001. Yet, her business didn’t really get started until 2008 with the birth of the filly, Ace Dun It Smart (Hollywood Dun It x Kittys Smart Chic). At one point in 2014 she owned 4 daughters of Hollywood Dun It. Now, only two of those mares and two of his grand get are owned by Almut’s farm, ACE Western Horses. The photo above shows her sorrel colt, ACE Dunit With Spark (Jacs Electric Spark x Good Lookin Dunit) on the right, and her red dun filly, ACE Dunit Witha Chic (Hollywoodstinseltown x ACE Travelin Smart) on the left.

Her breeding program is still in its infancy and thus not many of her horses have competed in the show ring as of yet. When asked about her significant accomplishments she said, “Everybody who has a horse from me is happy with them.” She went on to say, “One of my mares I bought as a foal was a European Futurity Finalist in the Levels 2, 3 and 4 at four years old. That mare is expecting her second foal by Wimpys Little Step.” 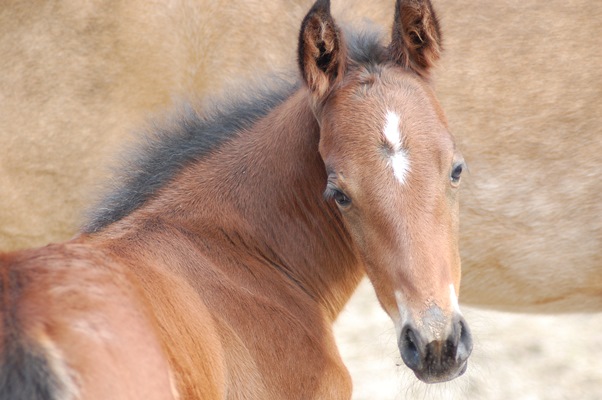 The goal of her breeding program is to produce healthy, good footed horses with strong bones which are easy to handle and ride. She said, “Horses that can either be a partner in the spare time for everything or be a top notch competitor in reining. The pedigrees are good enough to breed with too.”

The stallions Almut wishes to use in her breeding program are mostly located in the United States.  As she calls Germany home her only option to breed her mares is with the use of frozen semen. She has worked with Select Breeders Southwest (SBSW) in Texas to ship frozen semen to Germany and uses SBS North Germany to breed her mares with that frozen semen. The photo above right is her Smart Spook colt, ACE Spook N Shine, and the photo below is her colt, ACE Mistr Tinseltown (Hollywoodstinseltown x Shining Summer Reins), which were both conceived using frozen semen.

Along with the advantage of using frozen semen for import purposes, Almut believes there are other benefits to using frozen semen in her breeding program. “An advantage for me is the possibility of using only half a dose if the semen is of great quality and motility and then preserving the other half. I like breeding with stallions that have proven fertility. Unfortunately, some of those stallions are no longer among us like Smart Chic Olena and Hollywood Dun It. It is a great opportunity to keep such legends alive and still get great foals by them.”

She points out another advantage is that the semen is there when she needs it. She need not rush to contact the stallion owner for semen when the mare comes into heat. The semen is already in storage at SBS North Germany. Therefore, all she has to do is take her mare to SBS North Germany when she is in heat, they check her until she is ready to be bred and then they breed her. 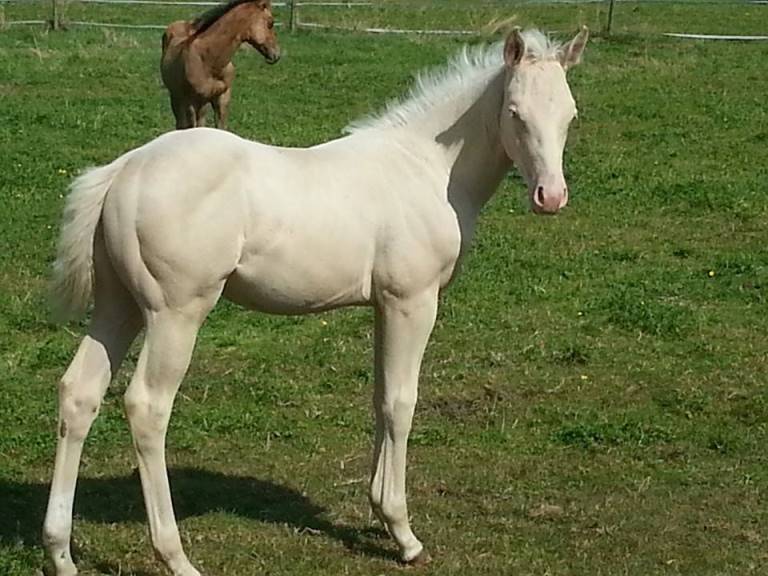 When asked why she chose Select Breeders she said,

“I have chosen SBS to take care of my mares because they have a great network around the world making it possible to get the semen shipped from other continents. They are very capable and knowledgeable about what they are doing. The vets at SBS North Germany try everything to get the mares in foal. My horses are outside every day and I feel comfortable leaving them in their care. They come back quiet and good looking, just as they did when the left my place.”

She went on to say, “And, I like the people there. They know your name and if you have questions they take time to answer them and help you in any way. I really appreciate that! I am very happy that SBS North Germany is not too far away from me and that I have the chance to bring them my mares for breedings to the best studs possible.”