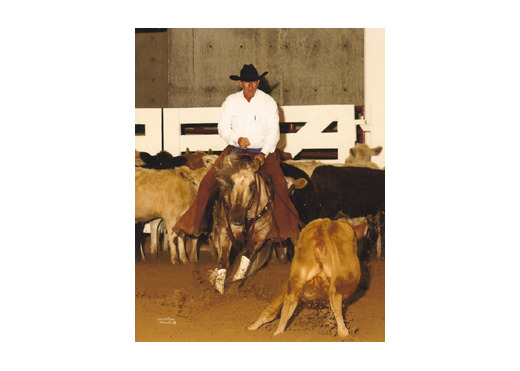 Gay Bars Silver has the pedigree of horses that could get out and get things done. They were versatile and athletic with a "want to" attitude. Silver's babies are just like their sire who is exemplary of his pedigree.

"Silver" is a 4X World Champion in the cutting pen. He accomplished that against tough competition, but he easily beat the competition. He is a Bronze medallion sire with his first foal crop. He is a Futurity Champion and NRHA money winning sire. His babies prove their willingness by going on to become roping, reining, cutting, WCH, and performance halter champions. As of this date Equistat earnings for 'Silver' foals is over $45,000.

Silver is also registered with the Colorado Ranger Horse Association (CRHA). Gay Bars Silver is now AAA registered!! He has foals in Germany and Australia.

Silver is 14.2; 940lbs; with a pretty head and very balanced body build. He has a full flowing mane and tail. Silver's outstanding pedigree will cross beautifully on ApHC and QH alike!!

Multiple other wins at smaller shows: ApHC, NCHA and ACHA

Gay Bars Silver babies have won over $14,000 in NRHA money. Over $20,000 won in ApCHA cutting. There has been a champion or reserve champion by Gay Bars Silver in every single foal crop since 2005. Those champions are ropers, cutters, reiners, barrel racers, all ranch classes, reined cow horse and even in halter. These foals are athletic, easy to get along with and cowy.

This Silver foal has points in...