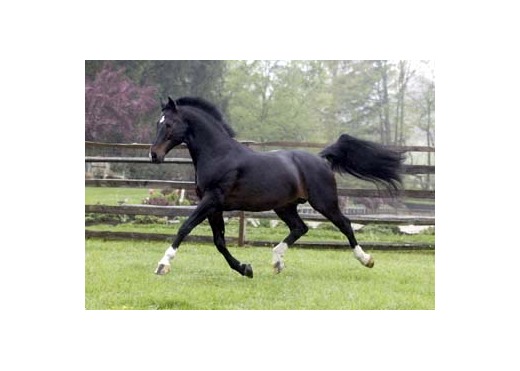 Contango launched his outstanding career by being named Champion of his 100 Day Test in Germany with a score of 146 points. He earned 9's on temperament and trainability and was awarded top honors in both dressage and jumping.

During his years in competition, Contango earned over 33 first place wins at Grand Prix including Dressage at Devon CDI-W and multiple CBLM and ABIC/USDF Region 1 Championships. Contango retired from competition in 2003.

In 2006 Contango was awarded Preferent status by the KWPN stallion committee. Preferent is a predicate awarded to keur stallions that demonstrate outstanding individual qualities and exceptional offspring. They have achieved their own breeding line with approved sons. Contango was the only Preferent stallion in North America at the time of his death.

Throughout his amazing career, Contango consistently sired 1st Premium and Top Ten horses and remains one of the top dressage sires in the world. Each year we see the versatility of Contango's get in both the United States and Europe from International Grand Prix Jumpers Maverick and Nouvelle to FEI Dressage champions Ravel, Montango and Now I'm Here.

In 2007, Contango sons won Gold and Silver medals at the North American Jr. Young Riders Championship and 5 offspring placed in the KWPN-NA keuring top 5. In 2008, three Contango offspring were ranked #1 in the KWPN-NA Top 5.

He has sired 2 KWPN Approved sons, Citango and Maestro.

Contango is approved by the KWPN, the Oldenburg Verband, the American Holsteiner Horse Association and the International Sporthorse Registry and he is nominated to the International Jumper and Dressage Futurity.