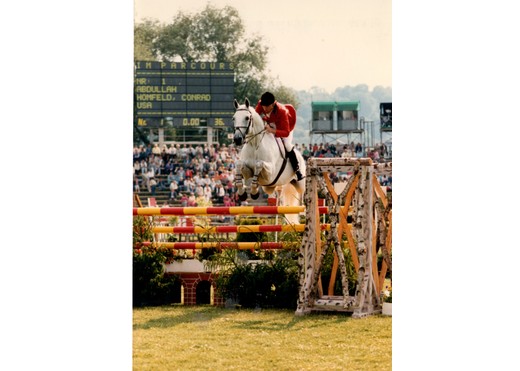 Abdullah's record in Show Jumping remains unequaled in the history of the sport.  Ridden by Conrad Homfeld they won Olympic Team Gold and Individual Silver medals in Los Angeles in 1984.  In 1985 they were World Cup Champions in Berlin, Germany.  At the World Championships in Aachen, Germany in 1986 they won Team Gold, Conrad won Individual Silver and Abdullah was named Leading Horse of the competition.

He was a Grand Prix winner beginning in 1980 at the age of 10 through his retirement at age 18.

Abdullah's performance career is well documented on the web site of the American Trakehner Association:  americantrakehner.com

Abdullah is the sire of numberous USEF Horses of the Year in both Hunter and Jumper disciplines. His offspring are also successful in both eventing and dressage.  An extensive list of his offspring is listed on the web site of the American Trakehner Assn.  americantrakehner.com ...Active Stallions