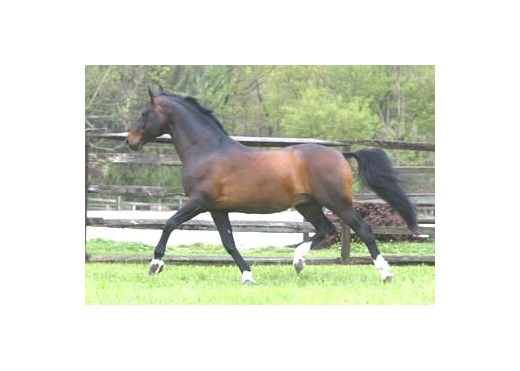 Rampal is one of two stallions at Iron Spring Farm that have been awarded the prestigious Crown predicate by the KWPN. This award was granted for being ranked as one of the top 200 dressage horses in the world. Rampal is by the world famous stallion Ramiro Z out of the preferent, Prestatie mare Terika. They both have an amazing list of famous offspring in their lines. Rampal is one of the top sires of dressage horses as well as jumpers and hunters.

Although Rampal is no longer with us, he is remembered as a notable Dressage Grand Prix champion. He had 14 Grand Prix wins including the Royal Dressage Festival-CDI and the USET Festival of Champions.

Today Rampal's accomplishments are seen through his offspring. His son Ovation, is a winning international show jumper, competing in Europe with former Olympian, Markus Fuchs. In 2004, daughter Valerie won the Filly Class at the Dressage at Devon Breed Show and in 2006 son Beaumont was Reserve Champion in the Colts and Gelding Championship at Devon and a KWPN-NA Top Ten Colt. His offspring are winning in eventing and the hunter ring as well. Rampal is Approved by the KWPN -NA, the Oldenburg Verband, and the International Sporthorse Registry. He is nominated to the International Jumper & Dressage Futurity. Rampal is available by EVA negative frozen semen.