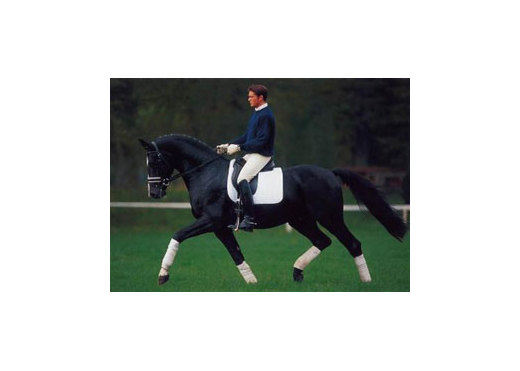 Watermark Farm is the exclusive agent in North America for Dressage Royal. Our thanks go out to Dorit and Hermann Kothe for allowing us to have access to this fantastic stallion.

Dressage Royal distinguishes himself not only because of his excellent conformation, his unimpeachable character and his fantastic pedigree, but also through his own performances: high rideability, his basic gaits and his show jumping skills are of exquisite quality. This was confirmed by the testing committee and the test rider. His rideability for dressage was judged with 8.21 points, his show jumping qualities with a straight 8.00 during his stallion testing.

Dressage Royal is fully trained to the Grand Prix level and has tournament success in Germany as a young horse.

Dressage Royal had tournament success as a young horse in Germany. He is fully trained through Grand Prix dressage.

Dressage Royal is a privately owned stallion in Germany, and is not heavily advertised by a large stud farm with a limitless budget. His owners, Dorit and Hermann Kothe, have chosen to have a super star stallion for their own use and that of their clients. The lack of a true “marketing machine” has not impacted Dressage Royal’s success as a sire – quite the opposite in fact! While his foal crops have not numbered in the hundreds like many big name stallions, Dressage Royal’s offspring have made an immeasurable impact in the performance arena. His son Desperado has several prestigious awards to his credit, including World Champion of Five Year Old Dressage Horses.

Dressage Royal has been selected as a sire to some of the most successful performance mares in Germany and all of Europe. For example, the mare Brilliant Ring Champion mare Silberaster OLD (by Sandro Hit x Canaster) was bred to Dressage Royal several times via Embryo Transfer in 2008. She was defeated in competition at the World Championship for Young Horses by Desperado (Dressage Royal x Rouletto/Barsoi xx) under rider/owner Nadine Plaster of Pferde24 Group.

Desperado has been awarded the OLD suffix in the winter of 2008 following his excellent competition results. He was the highest money earning horse for his age group and the first dressage youngster to beat all of the showjumpers. His arrival on the dressage scene was well documented after having been the Price Highlight of the Fall 2007 Vechta Auction in Oldenburg as a four year old gelding. Desperado was the clear highlight of the auction collection with his rhythm, powerful movement and mesmerizing gaits, resulting in the knockdown price of 210,000 Euros. This lovely gelding was purchased by the Pferde_24 Group from Baden-Wurtemburg. In the winter of 2009-2010, Desperado OLD was moved into the prestigious barn of Carola Koppelman in Germany. There is a full write up of his stellar career and a recent photograph HERE.

In the 2009 Swiss Young Horse Championships, there were more than a few Dressage Royal offspring competing! Please take a moment and peruse the articlethat goes into the details of bloodlines and scores. For a privately owned stallion this is a testament to his consistent production of rideable, trainable young horses with international quality movements.

UNO Don Diego (x Falkland/Tannenberg) who was awarded Premium status, after completing his Licensing with scores of 9, 9, 8, 9, 8, 7, 8, 9, 8 and 9, and is now standing at stud in Denmark. Like his relative Desperado OLD, he has qualified for the World Championship for Young Horses in Verden in August 2009 for the FEI Six Year Old Division.

In the 2009 World Championships for Youn Horses Dressage Royal was represented by Desperado OLD and UNO Don Diego. Both six year old horses advanced to the Final Round and placed in the Top Ten. Congratulations to their support teams for such resounding success.

In the spring of 2011, UNO Don Deigo had his first son declared Champion Dressage Stallion at the Danish Warmblood Stallion Licensing! ERA Dancing Hit had a lovely write up and photograph on Eurodressage.com which you can see HERE.

Several other sons have been licensed for breeding in Europe. They have received favorable comments on their type, conformation and outstanding disposition.

The production of successful horses does not end with Desperado OLD – Dressage Royal has been quite prolific with several licensed sons. Damsey (x Ritual/Grande/Ladykiller xx) was bred by Dorit and Hermann and sold at the conclusion of his high placing at the 30 Day Test to the Celle State Stud in Hanover. Celle, in turn, sold Damsey to Doug and Louise Leatherdale. Damsey has had a good performance career – he has competed at the World Championships for Young Horses as a 5 and 6 Year Old as well as the Bundeschampionate under the tutelage of the staff of Jens Meyer’s stud farm.

Damsey has been crowned Champion twice in Herning, Denmark at the Danish Stallion Presentation.

The US Olympic mare Brentina (Brentano II/Lungau) has been bred to Damsey via ET for 2010 AND 2011...so in keeping with the long standing breeding tradition, if you like the son, breed to the father - consider Dressage Royal for your mare in 2010!