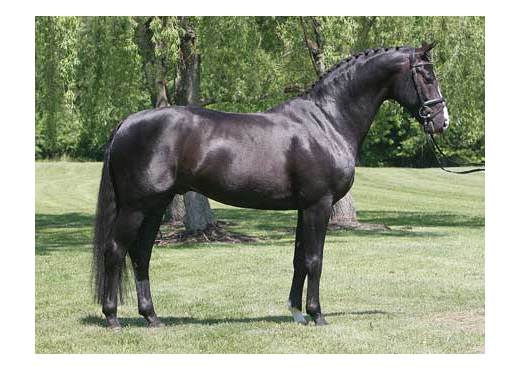 In the vast open lands of former eastern Germany, Paul Schockemöhle owns thousands of acres outside a town called Lewitz. There, hundreds of young horses grow up in large herds, given freedom to run over miles of terrain and the opportunity to develop in nature. Several times a year, the skilled horsemen of the Performance Sales International (PSI) organization travel to Lewitz to select individuals to gear up for stallion licensing, mare inspections, or to start under saddle as riding horses. It is in this environment that Davidoff Hit grew up, developing a strong foundation and natural condition.

PSI owned both Davidoff Hit's sire and damsire: Don Davidoff and Sandro Hit, both Gold Medalists of the World Breeding Championships for Young Horses. Don Davidoff had very few offspring due to poor fertility, so in 2004, when his first foal crop came of age to go to the Oldenburg Körung, great interest surrounded his two sons. Through good contacts, we had the opportunity to access this interesting young stallion on behalf of Harmony Sporthorses prior to the Körung. PSI's Daddy Cool and Davidoff Hit were both approved at the Körung, giving the next generation the opportunity to carry forth Don Davidoff's name.

After the Körung, Davidoff Hit went on to Hengststation Pape, where Ingo and Susan Pape took on his preparation for the stallion performance testing. Some bad luck forced Davidoff to rest for a few months prior to the testing. He was not quite fit and strong in is work at the time the testing began, but the decision was made to send him anyway. While Davidoff Hit did not garner Class I status at his performance testing due to the bell curve of the outstanding test group, he achieved highlight scores of 9 on character, 8.5's on temperament, willingness to work, constitution, and rideability and an 8 on his walk.

Davidoff Hit's foals have demonstrated his powerful, elegant conformation is readily passed on along with the expressive volume of his movement.

In 2007, Double-Oh-Seven (Davidoff Hit - Festrausch) was champion colt of the ISR/Old, NA inspection at Hilltop Farm. With an overall score of 8.6 and a 9.0 on his movement, this colt was the shining star among the group of six foals presented.

At Dressage at Devon in 2008, represented by Davi’s Danseur OBX and Dolcé Amoré MVF, Davidoff Hit was the Reserve Champion of the Get of Sire Class. These two young horses earned 80.00% in a highly competitive class of renowned sires. Davi’s Danseur OBX is bred by Don and Dee Kapper of Outer Banks Farm in Beach City, OH out of the Oldenburg mare, Casa Blanca (Cabaret – Caribo). Dolcé Amoré MVF is bred by Sharon Heaps of Mountain View Farm in Schuylkill Haven, PA out of the Westfalen mare, Deseree (Dinard L – Landino).