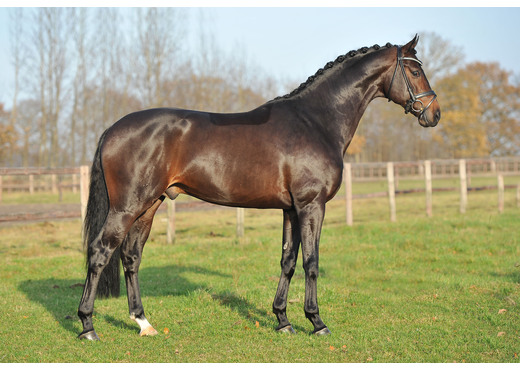 Owners Comments: Harmony’s Diamo Gold was awarded 1st Premium at his Oldenburg Stallion Licensing in 2009. This modern, expressive, leggy stallion has been a showstopper from the very start of his career. In 2011, Diamo Gold was the Oldenburg Regional Champion, qualifying him for the German National Championships, the Bundeschampionat. Again, as a 5-year old, he qualified for the Bundeschampionat with an 8.5. He confirmed his elite caliber by qualifying for the Bundeschampionte for the third year in a row in 2013, with an overall score of 8.4, receiving a 9.5 for his trot. In 2011, the VhW approved and licensed Diamo Gold, a real coup as an Oldenburg branded stallion. Diamo Gold’s sire Dimaggio is a World Champion with proven ability to produce international class dressage horses. Dimaggio was the Reserve Champion of his stallion performance testing at Neustadt/Dosse, placing 2nd in dressage with a high index of 133.39. He went on to place 4th among Germany’s best at the 1999 Bundeschampionat and soon after made a sweeping victory of the British Young Horse Championships under Suzanne Davis. As a 5-yr old he was World Champion at the FEI World Breeding Championships for Young Horses and continued a successful competition career up through Intermediare I. Diamo Gold’s granddam Eskoria has produced five licensed sons including, Serano Gold, Sun Gold, Diamond Gold, Exupery, and Deus. She descends from the Edoste damline, one of the best in German dressage breeding. Diamo’s damline brings refinement and additional top rideability through his damsire Ex Libris and the famous Hanoverian G-Line (Grundstein II). Harmony’s Diamo Gold’s offspring are already showing his elegance, refinement and ultra long legs. Several have been chosen for Elite Auctions. In 2013, Diamo Gold was purchased by Harmony Sporthorses and was imported to the US. He will continue his show career as Harmony’s Diamo Gold under Susanne Hassler.